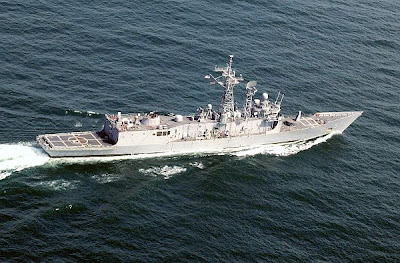 The ship departed its homeport for a deployment to the Western Pacific in support of the global war on terrorism.

"We are extremely excited about this deployment," said Cmdr. Rich Haidvogel, commanding officer of Reuben James. "We have been training for this and the crew is ready to complete the tasking of the mission."

For months prior to deploying, Sailors anxiously awaited the day they would get underway.

"We've been pumped up so much for the last couple of months, and we're ready to go," said Operational Specialist 3rd Class Jeremy Zimmer.

During a deployment, the Sailors must rely on each other more than a typical workplace, due to the close quarters that a Navy vessel provides.

"We come together more underway and go from being co-workers to more like a family because all we have is each other, said Zimmer.

Reuben James is a multi-mission platform designed to escort and protect carrier strike groups, expeditionary strike groups, underway replenishment groups and convoys, in addition to conducting anti-submarine and anti-surface warfare.
at 8/28/2007 06:12:00 AM