Russia Building an Indian Aircraft Carrier. Is China Next? 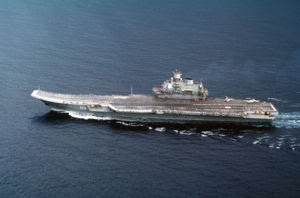 According to a news article on AsiaNews.it:

Moscow recently approved a rearmament package up to 2015. Of the US$ 192 billion allocated to the program, 25 per cent will go into building new ships, including six new nuclear-powered aircraft carriers to be built over the next 20 years. Although it still has about 300 ships, the Russian Navy was badly neglected after the collapse of the Soviet Union in 1991.

Some analysts dismiss talk of rebuilding a navy with global reach as propaganda ahead of parliamentary elections later this year, but others suggest that it is more than bluster because Russia is now earning an estimated US$ 1 billion every two days from its energy exports, and so has the means to do it.

Moreover, India and China depend to a significant degree on Russia for their own naval needs. However, Russian naval builders have recently had problems and had to announce a three-year delay in the construction of a US$ 1.5 billion aircraft carrier for India.

For Beijing a carrier would be a fundamental addition to its navy if it wanted to stand up to the United States and secure its energy supplies (which travel through the Strait of Malacca) or even mount a possible military intervention against Taiwan.

If China decides to develop a carrier for training and eventual operation, it may use the Varyag, a Kuznetsov-class Soviet carrier that was only 70 per cent complete when the Soviet Union broke up. Although it was bought by a Chinese firm in 1998, the mainland would still require help from Russia to bring the Varyag into service.
at 8/11/2007 07:44:00 AM