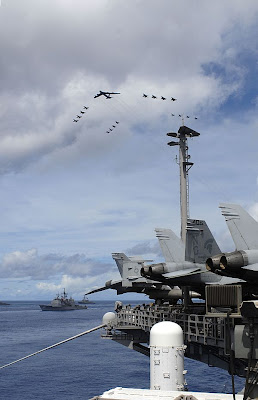 Aircraft from the Navy, Marine Corps and Air Force including a B-52 bomber conducts a fly by of the John C. Stennis, Kitty Hawk and Nimitz Carrier Strike Groups during a photo exercise (PHOTOEX) concluding Valiant Shield 2007. Valiant Shield was the largest joint exercise in the Pacific this year. Held in the Guam operating area, the exercise included 30 ships, more than 280 aircraft and more than 20,000 service members from the Navy, Air Force, Marine Corps, and Coast Guard. (U.S. Navy photo by Mass Communication Specialist 1st Class Denny Cantrell)

As part of Exercise Valiant Shield 2007, Carrier Air Wing (CVW) 9, embarked aboard USS John C. Stennis (CVN 74), has been flying sorties and participating in air operations with components of the Navy, Air Force and Marine Corps in a large-scale exercise in the Guam operating area.

Valiant Shield puts to the test CVW-9 aboard Stennis, CVW-5 aboard USS Kitty Hawk (CV 63), CVW-11 aboard USS Nimitz (CVN 68), as well as Air Force aircraft. More than 20,000 Sailors, Airmen, Marines and Coast Guardsmen are participating in the exercise involving 30 ships and about 280 aircraft.

We’ve been conducting robust defensive counter-air and maritime interdiction sorties here,” said Commander, CVW-9, Capt. Sterling Gilliam. “Any opportunity we have to exercise interoperability, not only between carrier strike groups, but between the services - the Navy, the Air Force - we should take to hone those skills and this is a wonderful opportunity.”

The weeklong exercise includes a multitude of air operations geared around surface strikes, air-to-air combat and air space patrolling and protecting. The purpose of the exercise is to test the military’s ability to gather a large number of cooperative forces and enables real-world proficiency in detecting, locating, tracking and engaging units at sea, on land and in the air in response to a range of mission areas. The entire scenario gives commanders a practical view of tactical planning and placement of military forces on a large scale.

“The Navy stands to gain here because we will prove, yet again, our ability to operate in a multi-carrier strike group environment,” Gilliam said. “Also, the training and proficiency that our air crew and the air crew in our sister air wings will gain will be invaluable as we build these tactics and build a base of knowledge and a level of proficiency in this maritime interdiction defensive counter-air environment.”

There are quite a few differences between the exercise and what CVW-9’s been accustomed to during their last seven months of deployment. The tempo required during the exercise has the air wing flying an average of more than 100 sorties per day, a greater average than flown during their five months supporting combat operations during Operations Enduring Freedom and Iraqi Freedom. They’re also relying heavily on fuel provided from CVW-9 aircraft instead of fuel provided by another service or detachment’s tankers.

“A lot of the mission is geared on a blue-water way of fighting, and it’s more self-sufficient,” said CVW-9 operations officer Cmdr. Ernest Jones. “It’s something we haven’t done in a while.”

Despite the large number of forces involved, the exercise is designed to put every player in an independent role supporting the same cause.

“It’s a very large scenario and everybody has their piece of the pie,” Jones said. “As a whole, it works pretty well.”

CVW-9, along with all the other participants in Valiant Shield, are testing the real-world application of tactics formulated by senior military commanders from multiple services to enable the U.S. to enhance joint-operation proficiency. This shows the military’s ability to rapidly bring together joint forces in response to any regional contingency.

“What we’re doing here is proving a number of tactics, techniques and procedures that have been developed on paper,” Jones said. "To do that, you need to come out in the middle of the ocean with the bad weather, and with a pitching deck, and with whatever other obstacles pop up and see if the techniques really survive in the real world, and I’m happy to report it does.”

Contrary to most of the combat support carrier air wings have been training for and participating in over Afghanistan and Iraq, Valiant Shield is geared to simulate an at-sea scenario in which the multiple-carrier strike groups integrate air and sea power with joint forces.

For Marine pilots embarked aboard Stennis, this offers a unique insight into a type of training Marine pilots do not typically participate in.

Youngberg said he will not forget the unique opportunity for a Marine pilot to see how the Navy does business on board an aircraft carrier and what they perceive as a threat and how they handle those threats. There are very few Marine squadrons that would get the chance to participate in an exercise like Valiant Shield, and it’s very good training for the pilots, all the way down to the power liners who help launch the aircraft, he explained.

Valiant Shield is scheduled to conclude Aug. 14 and marks the last major evolution for the John C. Stennis Strike Group before they begin their transit across the Pacific Ocean back home.