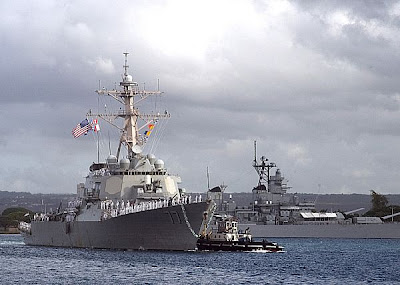 While deployed, O'Kane participated in a wide variety of exercises and operations, such as maritime and approach operations and expeditionary strike force training in the Persian Gulf and Exercise Valiant Shield 2007 off the coast of Guam.

“O’Kane deployed at a high rate of speed to the Middle East and contributed to stability and security of that region and set a one-day record for having the most approach and assist visits in the Arabian Gulf,” said Commander, Carrier Strike Group 3, Rear Adm. Kevin Quinn. “She also interacted with the navies of that region, which helped build the capability and capacity of those forces to deal with maritime threats in their own waters. O’Kane’s performance was outstanding.”

Arabian Gulf is a body of water more commonly known as the Persian Gulf.

Cmdr. Tom Druggan, O’Kane’s commanding officer, elaborated on her accomplishments during the deployment.

“The ship exercised every capability of surface warfare,” said Druggan. “We’ve done approaches and boardings for visit, board, search and seizure operations. We escorted a lot of high-value vessels through the Straight of Hormuz and conducted safety of navigation through the Straight of Malacca. We conducted a tremendous amount of anti-submarine and air warfare exercises during Valiant Shield 2007. Overall, it was a very successful deployment.”

During port visits, O’Kane’s Sailors were ambassadors to a variety of nations throughout the Middle East and Southeast Asia. Sailors also used these opportunities to relax and learn about local culture and customs.

“The crew did a great job on liberty,” said Lt. Cmdr. Erik Eslich, O’Kane’s executive officer. “They took care of each other, and they were good ambassadors for the ship, strike group and their country. I couldn’t have asked for a better performance from the crew.”

For O’Kane’s crew, returning home is filled with excitement and good memories from the deployment.

“This cruise has been an unforgettable learning experience,” said Cryptologic Technician Technical 2nd Class (SW) Jason Welch, who finished his first deployment. “There were many good times over this long deployment, but I’m ready to go home and relax a bit.”

Druggan said O’Kane will soon commence its post overseas movement standdown to give the crew some well deserved time off, especially after an extensive work-up cycle.

“O’Kane hasn’t been operational just for the last seven months; we’ve only been in port two or three months of the last 15 months,” said Druggan. “That’s a lot of underway time, and they really deserve their upcoming shore leave.”