Blog Editor Note: I have just posted the latest COTHEN-Panther Net and TISCOM ALE and frequency list from Mark Cleary at:
http://monitor-post.blogspot.com/2007/08/cothen-panther-net-and-tiscom-ale.html 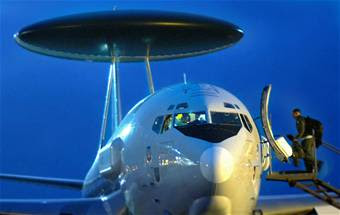 FORWARD OPERATING LOCATION MANTA, Ecuador (AFPN) -- American forces flying from here to hunt down drug runners could soon have to pack up their whole operation and move elsewhere.

But the announcement will not stop the U.S. counterdrug mission here until it is time to go, said Lt. Col. Javier Delucca, commander of the forward operating location's 478th Expeditionary Operations Squadron. It supports the flying units that deploy to Manta.

"We'll continue on. And if we have to move, we'll move. But we'll operate from here until the end," the colonel from San Juan, Puerto Rico, said.

Since President Correa's announcement, Colombia and Peru have both offered air bases from where U.S. forces can continue the counterdrug mission.

Regardless of the outcome, Manta, located about 180 miles southwest of the Ecuador's capital of Quito, will see no mission slowdown, Colonel Delucca said.

The mission to stop drug runners from getting their cargo to Central American countries or Mexico will continue nonstop. Air Force, Navy, Coast Guard and U.S. Customs aircrews will continue flying counterdrug missions over Colombia and vast stretches of the eastern Pacific Ocean.

And with good reason. The Manta mission has been a success since it started, and it continues to net more drug traffickers each day.

On an Aug. 1 mission, for example, an E-3 Sentry airborne warning and control system aircraft flying from Manta identified five possible targets, or tracks, during a 12-hour mission. That doesn't happen every day.

"If there's a boat in the water, we'll find it if we're within 200 miles of it. When we're flying over land looking for aircraft, then we'll see anything within 250 miles of our jet," said Lt. Col. Preston Kise, 965th Expeditionary Airborne Air Control Squadron commander. The unit from Tinker Air Force Base, Okla., is in the second month of it four-month Manta tour.

Surveillance crews report sightings to the Joint Interagency Task Force South, at Naval Air Station Key West, Fla. That's the headquarters for the counterdrug effort in the region. The headquarters direct the surveillance flights, based mostly on information gathered from human intelligence sources, and direct what actions to take against drug runners.

So searches are not random. Even so, Colonel Delucca said searching an area larger in size than the continental United States for small aircraft and 60-foot boats can sometimes seem like searching for a needle in a haystack. But human intelligence sources help concentrate searches and often ensure the long surveillance missions pay off.

Aircrews flew more than 1,200 missions from Manta in 2006, and helped seize more than 258 tons of illegal drugs with an estimated street value of $5.2 billion, Colonel Delucca said. So far this year, Airmen have flown more than 800 missions and helped net drugs worth $2.4 billion.

"That's another 125 tons of drugs that aren't going to make it to the United States," said Colonel Delucca, a KC-135 Stratotanker pilot.

The task force lets the surveillance Airmen know when one of their sightings leads to a successful bust. In March 2007, a suspicious vessel found by a flight from Manta led to the task force's largest drug bust, 20 tons of cocaine seized from a fishing boat off the coast of Panama, the colonel said.

At Manta there was a "tremendous feeling" of satisfaction because "we were a big part of that" bust, Colonel Delucca said.

On their Web page, U.S. embassy officials in Quito state that more than 60 percent of the illegal drugs captured on the high seas of the eastern Pacific in 2006 resulted from information gathered by surveillance flights from Manta.

As an air battle manager, Colonel Kise is part of a Sentry's "back-end crew" of 20 to 25 Airmen. They monitor the radars and find the drug runners. Joining the crews are an Ecuadorian air force and two Colombian air force "riders."

Colonel Kise agrees missions can seem to last forever. But being in an operational zone helps take the edge off the flights.

"We've had moments of excitement," said Colonel Kise, of Skaneateles, N.Y. "And the realization that we're really helping out in the war on drugs keeps us going."

But the counterdrug mission is a team effort. There are other locations in Colombia, Curacao, Honduras and El Salvador also involved in the drug war.

To keep the surveillance aircraft airborne for their long missions, there is also a KC-135 Stratotanker unit always deployed to the forward operating location. Presently, the Tennessee Air National Guard's 134th Air Refueling Wing is on duty.

While the operation is big and the rewards bigger, there are not many Airmen at Manta. The bilateral agreement allows up to 500 U.S. forces at Manta. But there are fewer than 200, including eight on a one-year tour, and they occupy just a tiny part of the Ecuadorian air force's Eloy Alfaro Air Base. The fighter base shares a runway with the city's civilian airport.

Colonel Delucca said the forward operating location has a parking ramp with space for four large aircraft, like the Sentry and the tankers, and four medium spaces, for Coast Guard HC-130 and Customs P-3 Orion aircraft. To house and feed the Airmen, there is a small compound with a handful of buildings that include dormitories, a cafeteria and offices.

Politics aside, the colonel said the Americans get great support from the Ecuadorian air force. He meets weekly with Combat Wing 23 commander Col. Eduardo Cardenas.

"We work with the Ecuadorian air force every day. We're on their base," Colonel Delucca said.

Since arriving, the American forces have forged a strong relationship with their Ecuadorian counterparts. For example, the Ecuadorian air force is responsible for the external perimeter of the forward operating location, while Air Force security forces are responsible for the internal security. The two share a combined security center, and a joint fire department.

"Everything we do down here is in concert with the Ecuadorian air force or the host nation airport," Colonel Delucca said.

Colonel Cardenas, who is from Latacunga, earned his pilot's wings through Air Force flight training in Texas and New Mexico. He said his wing will provide the U.S. forces the support they need so Air Force aircraft and aircraft from the other services can operate from the location.

"The (counterdrug) mission is very important not only for this base, but also for our country since it is fighting a plague against humanity," Colonel Cardenas said. "So this is an important effort for the entire country."

That certainly applies to Manta, which is on Ecuador's Pacific coast. A commercial and fishing port, it has of more than a quarter million people. Tuna fishing fuels the economy. And it's also a favorite Ecuadorian holiday resort. The city has benefited from the American presence.

It is money taxicab driver Jose Reyes said the city needs. A lifelong Manta resident, the father of four said having the Americans at Manta has another key benefit.

A slight man with thinning hair, Mr. Reyes is quick to voice his opinion on whether U.S. forces should stay in Manta.