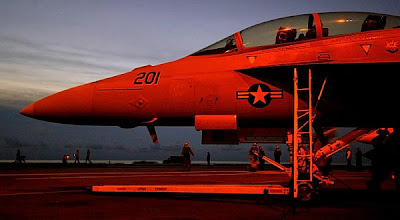 An F/A-18F Super Hornet assigned to the "Red Rippers" of Strike Fighter Squadron (VFA) 11, sits on the flight deck of the Nimitz-class aircraft carrier USS Harry S. Truman (CVN 75) as Sailors get ready for the first cycle of night flight operations. Truman is underway in the Atlantic Ocean participating in Operation Bold Step where more than 15,000 service members from three countries will participate in the Joint Task Force Exercise (JTFX) in preparation for deployment to the Persian Gulf. U.S. Navy photo by Mass Communication Specialist 3rd Class Ricardo J. Reyes.

More than 15,000 service members from four countries are taking part in the pre-deployment, sustainment training, sea trials exercise that is being called "Operation Bold Step." The two countries participating on the blue team are the United States and United Kingdom. In addition; Peru and Chile are participating on the red team.

"Operation Bold Step" is aimed at providing realistic training environments for the U.S. and coalition forces, mimicking the operational challenges routinely encountered during military operations around the world.

By and large the purpose of the training exercise is to ensure military forces are prepared to support any mission and are ready for deployment on short notice.

Truman's commanding officer Capt. Herman A Shelanski said exercises like JTFEX help the Navy attain the Chief of Naval Operations' goal of a "1,000-ship navy" by working with our ally countries.

"What's unique about this now is that we are learning how to operate together in a training cycle," said Shelanski, "which allows us to work out any type of inconsistencies up front."

In the past, ships would typically deploy to areas like the Mediterranean Sea, Persian Gulf or north Indian Ocean and just start operating with no kind of prior training with one another, said Shelanski.

"By operating with our allies now, we are learning how to do things before hand, which is really important for real world operations," Shelanski added.

Aboard Truman, the Combat Direction Center (CDC) is the epicenter where all the battle decisions are made during the exercise allowing crew members to rehearse interoperability and to confirm their coalition bilateral and interagency lines of communication.

"The biggest thing is reading the message traffic," said Domenico. "Every day you read message traffic to get a visual representation in your mind of how things will go and play out."

Domenico said by reading the message traffic report he is able to do his job successfully and ensure the aircraft are safe from enemy tactics.

In a scenario depicting an actual hostility, Domenico coordinates with the TAO and weapons operator to launch weapons in self-defense.

Domenico explained that operations specialists' ability to track combat tactics, keeping personnel like the TAO and up to date "makes my job very easy."

"They are able to keep the picture accurate and [their] updates enable us to operate and fight effectively during major combat and high-end deterrence operations," Domenico added.

In CDC -- from the admiral to the TAO -- they all want to see a picture relative to where the ship's position is to "ally forces, assumed enemies and anything unknown," said Cosentino.

"By knowing that information, it allows them to plan our mission or attacks, so that's very critical," Cosentino added.

As many as 30 ships make up three carrier strike groups playing a part in JTFEX, enhancing the preparedness of all personnel to jointly respond to threats.

Shelanski credits the more than 5,000 Sailors on board Truman for launching the pilots off the ship.

"We can't do it without any one of those Sailors," said Shelanski. "Therefore, they have to be trained, know their job and be motivated, which is the reason why we do exercises like this."