U.S. to Set Up African Command 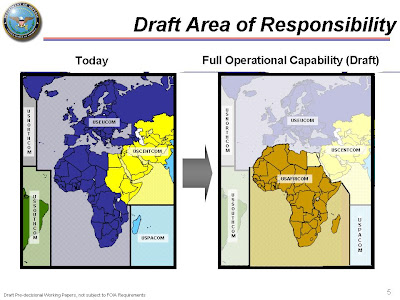 See my related story at http://mt-milcom.blogspot.com/2007/06/us-naval-forces-europe-prepares-for.html
The United States is to set up an African command, making it the fourth command which will be tasked with coordinating the U.S. army's activities in the continent, U.S. ambassador to the African Union (AU) Cindy L. Courville disclosed.

Briefing local journalists after a visit to the Combined Joint Task Force - Horn of Africa (CJTF-HDA) in Djibouti and to the USS Enterprise, U.S. Navy Carrier currently docked off the cost of Djibouti, Ambassador Courville said that the post-cold war, post-9/11 world offers an opportunity to rethink the situation.

She also said that it was difficult to put a time frame as to when the command will be fully established. She disclosed that a sub-combatant command would be established before setting up a full command. This command, according to the ambassador, will remain in Stuttgart, Germany probably for the next year as further decisions are made.

Ambassador Courville indicated that probably in the next three to five years the process of establishing the African command could be wound up.