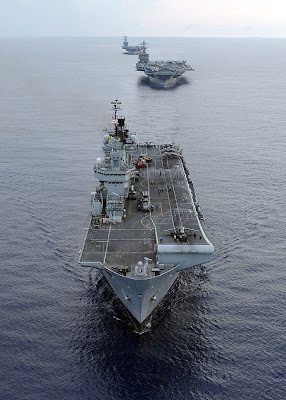 "The foundation of international maritime security is a network of navies, coast guards and law enforcement authorities from like-minded, freedom-loving nations all committed to the peaceful use of the world's oceans and seas. International coalitions with these common values will help defeat terrorist groups, leaving them no place to hide and no path to exploit for their purposes," said Rear Adm. Philip Hart Cullom, Commander, Eisenhower Carrier Strike Group.

The exercise is a "graduate-level" exercise to ensure U.S. and coalition forces can work together, deploy on short notice, and scale up as a combat capable force anytime, anyplace needed around the world.

"A coalition JTFEX like 'Operation Bold Step' reinforces this global network for security while testing a coalition's ability to rapidly aggregate as a force to deter aggression, yet also respond with precision, speed, and power if necessary," said Cullom.

Cullom stated that "although the training in JTFEX is primarily "naval" in nature, our actions at sea in this exercise are focused on joint inter-service objectives since our real world operations today are inherently joint in nature, where our objectives at sea and those on land are inextricably linked."

"There is great synergy in a multinational joint force," said Cullom. "The innovative things we are trying during this JTFEX will greatly enhance our agility and speed of response in future operations whether it is in response to natural disasters, stopping piracy, providing rapidly scalable combat power, or expressing international resolve in the early stages of any conflict."

There have been early successes of the Eisenhower and Truman Strike Groups and the Illustrious Strike Group. Most notably, there was the successful landing of a Marine MV-22 Osprey on the deck of Illustrious. Additionally, the Royal Navy ship continues to lead a strike group of U.S. Navy destroyers and frigates, along with a squadron of U.S. Marine AV-8B "Harriers" during JTFEX.

According to Cullom, "This exercise shows we have the ability to adapt our coalition team to produce a flexible and capable force, able to meet the full spectrum of Maritime Security scenarios at a time or place of our collective choosing. JTFEX is not just an exercise. It is an opportunity to demonstrate that we can adapt to the ever-changing maritime security environment."