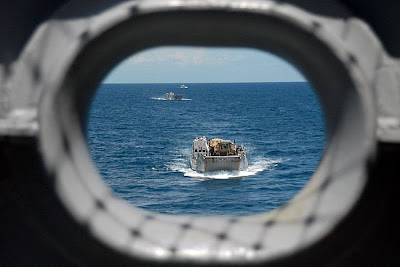 Landing Craft Utility (LCU) 1664, attached to Assault Craft Unit (ACU) 2 from Little Creek Amphibious Base, Va., along with other crafts from ACU 2, makes her approach on the amphibious assault ship USS Nassau (LHA 4). Nassau is underway with other elements of Nassau Expeditionary Strike Group in preparation for a deployment next year. (U.S. Navy photo by Mass Communication Specialist 2nd Class Andrew King)

LCUs and LCACs are crafts used to transport troops and equipment to the shore, while also being able to transport tracked or wheeled vehicles. With the Marines being the most valuable of those assets carried to shore, it is important for the Navy and Marine Corps team to work hand and hand during these operations to ensure safe and seamless operations.

Though TCAT and the well-deck operations are part of the ship’s and strike group's regular amphibious certifications, it also marked the first time the Navy and Marine Corps team of the Nassau Strike Group have conducted tactical training operations together in this deployment cycle.

While the certifications are reoccurring, conducting these types of training operations are crucial because personnel transfer so often and the ship deploys with a different MEU each time.

“Sometimes you launch and the water is as smooth as glass, and everything goes perfectly. However, sometimes you have environmental issues or wave action, and if everyone is not keen on what is going on at all times the craft can damage the ship on its way in,” he added.

“We have a very small margin for error,” said Boatswain's Mate 2nd Class (SW) Christopher L. Olschewski, member of Nassau’s 2nd Division. “Complications of any [kind] could cause death or serious bodily harm to a person.”

“Line handling mishaps are probably the most common problem with these training evolutions,” said Costa. “You just have to ensure that your people are qualified to be out there; and that is why we train.”

The Nassau Expeditionary Strike Group is made up of Sailors from six U.S. Navy ships and is augmented by warriors from the Marine Corps’ 24th MEU. The strike group is currently preparing for its regularly-scheduled deployment in early 2008.
at 8/30/2007 07:08:00 AM