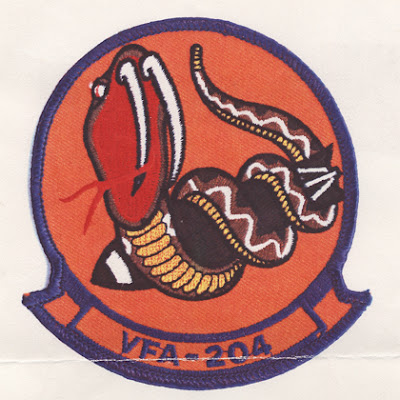 I am a plank owner and former River Rat from VFA-204 so I keep track of their exploits.

Valiant Shield is one of the largest annual exercises in the Western Pacific. This year's exercise will involve about 30 ships, 280 aircraft, and 22,000 Airmen, Sailors, Soldiers and Marines working together to enhance joint combat skills and interoperability.

“We’re going to be one of the training assets in Operation Valiant Shield,” said Lt. Cmdr. Brian Hennessy. “We bring a unique element for dissimilar training, which refers to air-to-air combat training.

The squadron completed required work-ups earlier this summer, including a Joint Task Force Exercise, collectively preparing the squadron for intense challenges a deployment is likely to present.

“We’ve trained to respond to any joint training type of role,” said Hennessy. “We will be able to do more complex exercises with other coalition partners at sea.”

The nearly 200 Sailors of VFA-204 said goodbye as they boarded their planes. For some, it is their first deployment; for more seasoned Sailors, this is business as usual.

“I’ve been pretty much every place you could go in the Navy. This is my fifth deployment,” said Aviation Ordnanceman 1st Class (AW) Leon Francis. “It’s still exciting for me, but even more exciting for the younger Sailors. Training them is an important tool in the global war on terrorism.”
at 8/14/2007 12:10:00 PM