Kearsarge Deploys in Support of MSO 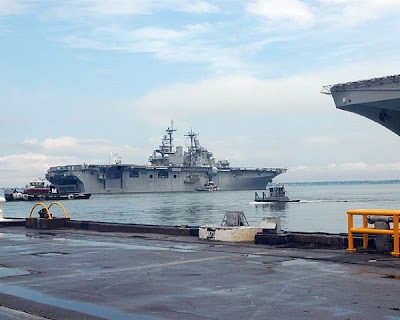 “I am extremely proud of this crew. Kearsarge captured every training opportunity offered and performed brilliantly throughout the training cycle. While deployed in 2005, Kearsarge supported Marines simultaneously in five separate locations, from Saudia Arabia to Baghdad and thwarted an Al Qaeda rocket attack in Jordan. Once again, whether it’s defending against piracy, protecting sea lanes, providing humanitarian assistance, or transporting Marines anywhere they need to go, Kearsarge Sailors stand ready. It’s our turn and we’re happy and proud to do it again,” said Gregorski.

“The challenging work up exercises allowed us to sharpen our skills and build our team work,” said Cmdr. Pete Pagano, Kearsarge executive officer. “We feel good about our readiness for the deployment. I think the scenarios provided during the exercises were very realistic and very relevant to the types of missions that we’ll be expected to perform.”

Family members and friends were on the pier to bid teary-eyed farewells and express their pride to their Sailors and Marines.

“I can’t thank family members enough for holding down the fort at home,” said Gregorski. “Not just spouses and children, but also mothers and fathers. We couldn’t do what we do out here if it wasn’t for their support."