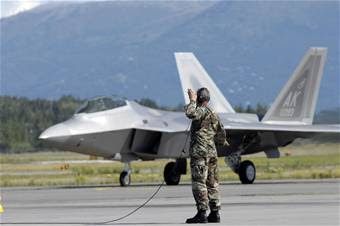 A crew chief marshals an F-22 Raptor into place at Elmendorf Air Force Base, Alaska, during a ceremony marking the aircraft's arrival Aug. 8. Six F-22s took part in the ceremony, with the base scheduled to receive 34 additional aircraft. Elmendorf should have its full complement of 40 aircraft by December 2009. (U.S. Air Force photo/Tech. Sgt. Keith Brown)

ELMENDORF AIR FORCE BASE, Alaska (AFPN) -- It was a historic day for Elmendorf as the base officially welcomed the first of its F-22 Raptor fleet during a ceremony here Aug. 8.

"These incredible airframes are ushering in a new day in the Land of the Midnight Sun," said Gen. Paul Hester, PACAF commander. "The unmatched capabilities of this superb airplane are simply unbelievable. It furnishes our Airmen with unrivaled air supremacy and provides us with the most lopsided and unfair advantages ever seen in the air power age."

"Elmendorf Airmen are not strangers to new aircraft and missions. The difference this time is we are teamed with our unrivaled wingmen of the Air Force Reserve," said Col. Tom Tinsley, 3rd Wing commander. "These professional Airmen will be integrated into every part of F-22 operations and are bringing Total Force Integration to a new level, a level where we can truly say we are no longer working toward Total Force Integration, but rather we are a total force."

The 90th FS, one of the Air Force's oldest fighter squadrons, celebrates its 90th anniversary Aug. 20. The squadron flew F-15E Strike Eagles before receiving the Raptor.

"The F-22 is our premier fighter and it will continue our tradition of owning the skies over the battlefield," said Capt. James Byrne, 90th FS F-22 pilot. "Our job is to be prepared to give our country the security it needs today and tomorrow. In order to achieve that end, we cannot judge the nature of future conflicts based on those of today and must train and equip our forces for operations across the full spectrum of conflict."

The captain also emphasized the operational benefits of flying the world's most advanced fighter, such as improvements in pilot situational awareness.

"The F-22 has the ability to display more information to the pilot, in a more logical fashion, than any other fighter in the world. At the same time, the Raptor degrades the enemy's awareness," said Captain Byrne. "Instead of the pilot fusing information from multiple inputs and having to build situational awareness from scratch, the F-22 presents the pilot with a 360-degree picture of the threat environment he is operating in. This frees up the pilot to focus on managing tactics rather than information."

"The bottom line is the Raptor pilot has a huge advantage against other aircraft, and it will maintain that advantage for years to come," he added.

Although the F-22 officially arrived Wednesday, base maintainers have been learning how to maintain the aircraft using four F-22 maintenance trainer aircraft at Elmendorf.

"The prior aircraft experience has been phenomenal in preparing the non-qualified maintainers on all aspects of the jet," said Senior Master Sgt. Pete Allan, 90th Aircraft Maintenance Unit Production superintendent. "The on-the-job training has been second-to-none, and this has enabled the squadron to be successful from the start. Without this capability, we would not have been able to provide the flyable aircraft required to keep the pilots qualified."

The advanced technology of the F-22 extends far beyond the pilot-friendly aircraft's operability. Maintainers are excited about the many improvements that will help make their jobs easier.

"The aircraft is extremely integrated, providing maintainers with fault codes that enable maintenance personnel to troubleshoot with relative ease," said Sergeant Allan. "The aircraft also primarily uses one level maintenance components; this means that we remove and replace the parts. There are very few items that get removed, repaired, and then re-installed. This reduces the time that is required to repair, because we are not waiting on another shop or work center."

That's not to say that maintaining the aircraft, particularly during the Alaska winters, will be easy.

"I think the winter weather will prove to be the largest challenge," Sergeant Allan said. "The first year will certainly be the most difficult, but I think subsequent winters will get easier as we gain more experience with the reaction of the aircraft."

Elmendorf will continue receiving F-22s over the next couple years, with all 40 Raptors scheduled to be in place by December 2009.

During the ceremony, Colonel Tinsley emphasized the importance of the F-22 and what its presence means to ensuring America's freedom.

"This is not only a historic day for Alaska and America, today stands as another clear message to those who may threaten our freedoms," Colonel Tinsley added. "We stand vigilant, ready to defend those freedoms with the world's best Air Force."
at 8/13/2007 06:54:00 AM