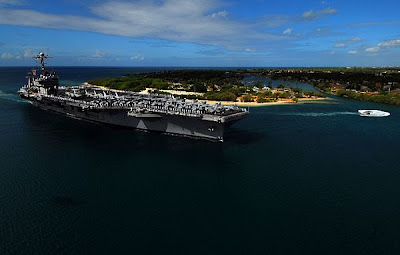 “The performance of the John C. Stennis Carrier Strike Group has been magnificent,” said Commander, Carrier Strike Group 3, Rear Adm. Kevin M. Quinn. “I couldn’t be more proud of them. Contributing to security and stability in the Middle East, as well as the Pacific, is one of the most important missions of the United States Navy.”

“Our air wing set records for combat support for troops in Afghanistan,” said Quinn. “Their precision bombing in support of troops on the ground helped achieve our national objectives in the area, and more importantly, they helped save the lives of our troops who were in direct contact with the enemy.”

“The purpose of the Expeditionary Strike Force operations was to refresh our skills in completing complex missions that required capabilities even broader in scope than Stennis can provide alone,” said Stennis’ Commanding Officer Capt. Brad Johanson. “From the delivery of emergency medical response from Stennis, to the movement of humanitarian supplies from Bonhomme Richard via LCAC [landing craft air cushion], and the repair capability of our Engineering Department and logistical capability of our Supply Department—the exercise was a complete success.”

After successfully completing operations in the 5th Fleet AOR, July 11, JCSCSG sailed to the U.S 7th Fleet AOR where Sailors and Marines enjoyed port visits in Singapore and Hong Kong and participated in more than 20 community relations projects.

Following the visit to Hong Kong, JCSCSG participated in Exercise Valiant Shield 2007 off the coast of Guam Aug. 7-14. The joint military exercise brought together more than 30 ships, including the USS Kitty Hawk (CV 63) and Nimitz CSGs; 280 aircraft; and more than 20,000 service members from the Navy, Air Force, Marine Corps and Coast Guard. Valiant Shield tested the military’s ability to rapidly bring together joint forces in response to any regional contingency, demonstrating the United States’ commitment to ensuring peace and stability throughout the Asia-Pacific region.

“All the strike groups in Valiant Shield performed extremely well,” said Quinn. “What we found in Valiant Shield is that we can come together at sea, working in a joint military environment, having not worked with each other a lot before and fall into a strike force construct to conduct integrated combat operations.”

JCSCSG wrapped up the operational requirement of its 2007 deployment with the conclusion of Valiant Shield and sailed to the U.S. 3rd Fleet AOR and into Pearl Harbor.

For two ships in the strike group, USS Paul Hamilton (DDG 60) and USS O’Kane (DDG 77), Pearl Harbor is their homeport. The rest of JCSCSG will continue heading east to San Diego and finally, Bremerton, Wash., to complete the 2007 deployment.

“When I look back on this great adventure of ours, the thing I’m most proud of is the performance of our young Sailors and Marines,” said Quinn. “They’ve left the comforts of their homes; they’ve left their families; they’ve gone forward into the combat zone to fight for our country, and their performance in that combat zone has been outstanding.”

"Throughout this deployment Stennis has set a new standard for the performance of carriers in a combat zone,” said Johanson. “The missions we sent into Afghanistan and Iraq and the strong presence we established in the Arabian Gulf made a very significant difference in providing security and stability to the entire region.”

The Arabian Gulf is a body of water commonly known as the Persian Gulf.