OK west coasters. Chance to do some searching of the HF spectrum for CWC HF nets. 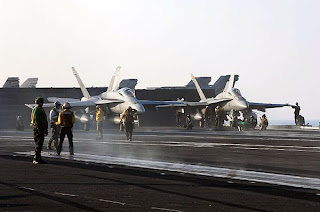 The eight-day exercise tests the military’s ability to rapidly bring together joint forces in response to any regional contingency. It also enables the United States to contribute to regional security and stability and demonstrates U.S. commitment in the Pacific.

“Exercise Valiant Shield is a very complicated and challenging joint exercise and will test our tremendous capabilities,” said Stennis’ Commanding Officer, Capt. Brad Johanson. “However, a joint environment will be very straight-forward for Stennis, because as we demonstrated during Operations Enduring Freedom and Iraqi Freedom, we’re used to working in a coalition environment, which not only includes joint forces, but coalition partners.”

“The Marine Corps thrives in a joint environment, and we bring a lot to the table,” said Maj. Daniel Goodwin, executive officer assigned to the “Death Rattlers” of Strike Fighter Squadron (VMFA) 323. “I look forward to this exercise, because we’re going to be doing some operations that will make us better prepared, better trained and keep us sharp.”

In all, more than 20,000 Sailors, Airmen, Marines and Coast Guardsmen will participate in the exercise that involves 30 ships and 280 aircraft.

“All joint warfighting capabilities will merge together for one set of exercise objectives,” Johanson added. “What our strike group brings, after leading four months of missions in the 5th Fleet area of operations, is a warfare commander capability to enhance the ability of all the strike groups merged together in this area of responsibility.”

With the vast area of the Pacific Ocean, integrated sea and air power is essential for immediate response to any contingency.

By bringing these forces together, this training enables real-world proficiency in detecting, locating, tracking and engaging units at sea, on land and in the air in response to a range of mission areas.

“There’s going to be more sorties than we flew in the Arabian Gulf -- about 100 a day,” said Capt. Christopher Murray, deputy commander, Carrier Air Wing (CVW) 9. “It can be challenging, but this just shows the flexibility of a carrier strike group. When we need to get in close to support ground troops, we can do that, and we’ve done that. This exercise will show another area of expertise; our ability to conduct operations in the open ocean.”

The Arabian Gulf is the body of water more commonly known as the Persian Gulf.

Valiant Shield offers a unique opportunity to have multiple aircraft carriers train together in a maritime environment and enhance operational proficiency.

“I think this whole exercise will be challenging, but it will also provide a better perspective for how to command and control these operations in a real-world scenario,” said Goodwin.

“We care very much about the safety of our crew and the environment, as we complete these very complex evolutions,” said Johanson. “We always follow set environmental policies with strict adherence, while still completing Stennis’ vital mission at sea.”

“This has been a very successful cruise for Stennis, the air wing, DESRON 21 and our other strike group ships,” said Murray. “Everyone has done a fantastic job, and we plan to finish this deployment strong by performing well in this exercise.”