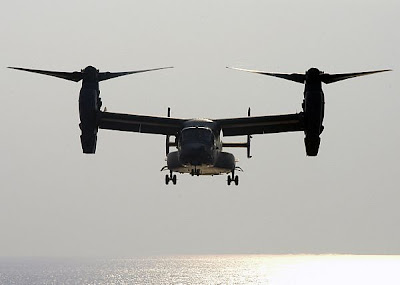 An Air Force CV-22 Osprey used the flight deck of the multi-purpose amphibious assault ship USS Bataan (LHD 5) for training Aug. 13-14 while the ship was underway off the Atlantic Coast.

The single aircraft, from the 8th Special Operations Squadron (8th SOS) in Hurlburt Field, Fla., and its crew of instructors spent the evening landing and taking off for deck landing qualifications. According to Air Force Capt. Paul Alexander from 8th SOS, this CV-22 is part of a four aircraft squadron that is designated as the first fully operational CV-22 squadron.

The Air Force purchased 50 of the tilt-rotor aircraft, predominately used by the United States Marine Corps, for use by the Air Force Special Operations Command. The first deployment for the special operations CV-22s is set for 2009.

For the pilots who landed aboard Bataan, the chance to land somewhere other than the ground was an exciting first.

"We brought some instructors aboard who have never landed on a ship," said Alexander. "We have a flight deck simulator that we use to train for these situations, but it is just a simulation. By coming out here, we practice on something that is real."

The CV-22 Osprey is a tilt-rotor aircraft that combines the vertical takeoff, hover, and vertical landing qualities of a helicopter with the long-range, fuel efficiency and speed characteristics of a turboprop aircraft.

"It's a great experience any time we get to deal with this aircraft," said Bataan's Air Boss Cmdr. Kris Croeber. "As large as they are, and with the amount of down wash these planes produce, it is a challenge for everybody involved.

"They all can learn something," said Croeber. "The experience is great for those pilots and great for us because we deal with Marines on this platform, and the Osprey is the future of Marine Corps aviation."
at 8/21/2007 06:46:00 AM