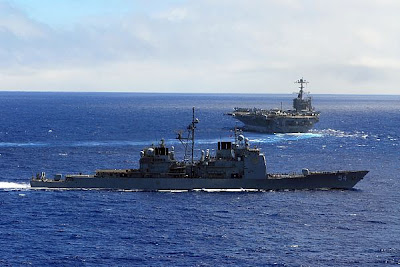 “The performance of the John C. Stennis Strike Group has been magnificent,” said Commander, Carrier Strike Group 3 Rear Adm. Kevin M. Quinn. “I couldn’t be more proud of them. Contributing to security and stability in the Middle East, as well as the Pacific is one of the most important missions of the United States Navy.”

Stennis, CVW-9 and the strike group supported combat operations over Afghanistan from the North Arabian Sea, and over Iraq from the Persian Gulf while in 5th Fleet. During OIF and OEF, CVW-9 flew approximately 8,000 sorties providing more than 22,000 flight hours, dropped more than 160 bombs and expended more than 11,000 rounds of ammunition during 82 strafing runs.

“The operations we did for our troops in Afghanistan and Iraq, we did those in support of troops on the ground, troops in contact with enemy forces, and our aircraft came in and provided the support they needed, which in some cases was the difference between life and death for our troops,” added Quinn. “Through [CVW-9’s] precision bombing and their precision strafing in support of troops on the ground, they helped achieve our national objectives in that area and more importantly, they helped save the lives of our troops who were in direct contact with the enemy in Afghanistan.”

While supporting combat operations, CVW-9 conducted a variety of missions, including close-air support for troops in combat on the ground, command and control operations as well as surface search and surveillance, ensuring the safe operation of the strike group at sea.

“The missions we sent into Afghanistan and Iraq and the strong presence we established in the Persian Gulf made a very significant difference in providing security and stability to the entire region,” said Stennis’ Commanding Officer, Capt. Brad Johanson.

“CVW-9 provided a variety of efforts both kinetic and non-kinetic,” said Capt. Sterling Gilliam, commander, CVW-9. “We were tasked with close-air support, reconnaissance and other tactical missions while operating in support of OEF and OIF.”

Along with five months of combat operations in 5th Fleet, JCSSG also participated in a number of exercises during its deployment, such as a unique humanitarian relief exercise in the Persian Gulf, dual-carrier exercises with USS Dwight D. Eisenhower (CVN 69) and Expeditionary Strike Force training with USS Nimitz (CVN 68) and USS Bonhomme Richard (LHD 6) while simultaneously providing close-air support to coalition ground forces in support of OEF and OIF.

“The support for the troops on the ground and in combat is by far the most significant thing we did,” Gilliam said. “But what I really am proud of, is that from the moment we pushed away from the pier, we took an aggressive operational mindset to make sure that we were combat ready and kept it until our mission was complete.”

Antietam served as the air defense commander for Stennis during JCSSG’s deployment.

“Antietam performed outstandingly across the board,” said Quinn. “She was right there with us in the North Arabian Sea when we were conducting strike operations into Afghanistan, literally saving the lives of our troops on the ground. She was with us when we transited the Straits of Hormuz and went up to the North Persian Gulf to conduct operations in support of our troops on the ground in Iraq. She also participated in several multinational exercises to develop the capabilities of those regional navies.”

After successfully completing operations in the 5th Fleet AOO July 11, JCSSG sailed to the U.S. 7th Fleet area of responsibility where Sailors and Marines enjoyed port visits in Singapore and Hong Kong and participated in more than 20 community relations projects.

Following the visit to Hong Kong, JCSSG participated in exercise Valiant Shield 2007 off the coast of Guam from Aug. 7 to Aug. 14. The joint military exercise brought together more than 30 ships including the Kitty Hawk and Nimitz Carrier Strike Groups, 280 aircraft and more than 20,000 service members from the Navy, Air Force, Marine Corps and Coast Guard. Valiant Shield tested the military’s ability to rapidly bring together joint forces in response to any regional contingency, demonstrating the United States’ commitment to ensuring peace and stability throughout the Asian-Pacific region.

Next on Stennis’ plate is a docked, planned, incremental availability period where it will go through about six months of maintenance and upgrades.

Gilliam said the rest of the squadrons will take their lessons learned from this deployment and begin preparing for when CVW-9 embarks Stennis again next year during work-ups.

Photo Below: An F/A-18C Hornet, from the "Argonauts" of Strike Fighter Squadron (VFA) 147, breaks the sound barrier while making a high-speed pass close to the Nimitz-class aircraft carrier USS John C. Stennis (CVN 74) during an air power demonstration. The air power demonstration showed the capability of Stennis and Carrier Air Wing 9 to service members' family and friends who were invited to get underway with the ship. Stennis is returning to the United States after a 7.5-month-long deployment promoting peace, regional cooperation and stability and supporting the global war on terrorism. (U.S. Navy photo by Mass Communication Specialist 2nd Class Ron Reeves) 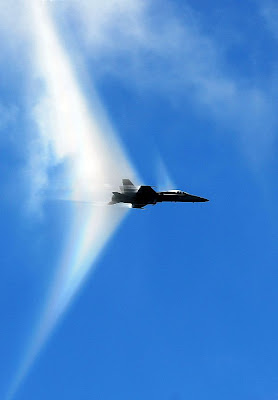