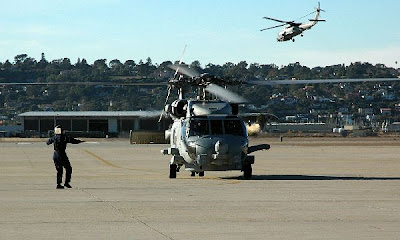 As soon as the simulator doors opened, HSM-41 pilots and air crewmen immediately began training with the TOFT 2.

"It is a proud day for naval aviation," said Capt. J.C. Shuab, HSM-41's commanding officer. "The TOFT 2 simulator is the future air warfare and gives our Navy the upper hand in precision and mission readiness."

According to Cmdr. Ed Balaton, Romeo training systems program manager of NAVAIR, benefits from the TOFT 2 include a more realistic simulation of combat environments along with having the ability to train for nearly every scenario.

"We began developing the TOFT 2 about a year ago," said Balaton. "We have added many new features including new designs weapon systems technology, graphics capabilities, and electro-hydraulic machinery that require far less maintenance than its predecessor."

Besides being equipped with the latest technology, the main goal of the TOFT 2 is to reduce mishap numbers and ensure pilots and aircrewmen return from their mission safely.

"Safety is a major concern of just about any squadron in the fleet," said Navy Aviation Warfare Systems Operator 2nd Class (NAC) Brain Hartwick. "The more realistic the training field is, the better prepared we'll be up in the air."

In the near future, the TOFT 2 will be able to link systems with other training simulators in different locations across the world and throughout every branch of service, said Balaton.

"The TOFT 2 is by far the best trainer in the world, which means our pilots are the best trained in the world," continued Balaton. "With plug and play technology currently in development, we will be able to simulate a full scale war scenario with ships in the fleet and Marines on the ground."
at 8/14/2007 07:03:00 AM