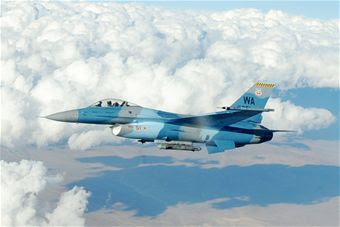 An F-16 Fighting Falcon Aggressor flies over the Nevada Test and Training Range after being refueled by an Ohio Air National Guard KC-135 Stratotanker Oct. 19, 2009. Red Flag 10-01 is a realistic combat training exercise involving the air forces of the United States and its allies. The exercise is conducted on the 15,000-square-mile Nevada Test and Training Range, north of Las Vegas. (U.S. Air Force photo/Airman 1st Class Jamie Nicley)

American, Norwegian and Dutch airmen and soldiers comprise the allied team in the exercise.

"The exercise is a great opportunity for people to get out of their comfort zones and fight a war at a rapid pace," said Col. Ellwood Hinman, 23rd Fighter Group commander at Moody AFB, Ga., deployed to Nellis as the Red Flag air expeditionary wing commander. "What you may have done (in previously deployed locations) was certainly great, but it's not what you're doing here. This Red Flag provides us the opportunity to maximize training throughout its duration."

The key benefit for most fliers is removing themselves from the vacuum of normal operations.

"We learn to integrate with other platforms as part of a large force to accomplish the mission," said Capt. Eddie Cannon, deployed from the 494th Fighter Squadron at Royal Air Force Lakenheath, England. "That's not something we normally get to do."

The exercise doesn't just include a team forming an air expeditionary wing and going through the motions. Those here as a part of Red Flag deal with a full-up aggressor force.

Known as the Red Force, aggressors are trained to challenge Red Flag participants on all aspects of war and serve as enemy pilots, space jammers, cyberspace infiltrators, and even dig through trash on occasion to challenge their Blue Force counterparts.

"We're trying to keep the focus on the big picture," said Lt. Col. Mike Rider, 414th Combat Training Squadron director of operations. "We're set up to challenge all our assets in full spectrum operations. Our aggressors are professionals, and they will challenge you."

The ability to receive the training comes from more than 12,000 square miles of airspace and 2.9 million acres that make up the Nevada Test and Training Range.

"The NTTR is a national treasure," said Colonel Rider. "It's a massive piece of land where we can fight and get things done."

Even in the midst of pushing people to their limits to prepare them for war, safety is reiterated as the most important part of the exercise.

"We're doing things fast, but procedures come first and foremost," said Lt. Col. Mark Ciero, AEW deputy commander, deployed from the 48th Operations Group at RAF Lakenheath. "There's nothing we should be doing here that compromises safety and gets someone hurt."
at 10/26/2009 09:41:00 AM