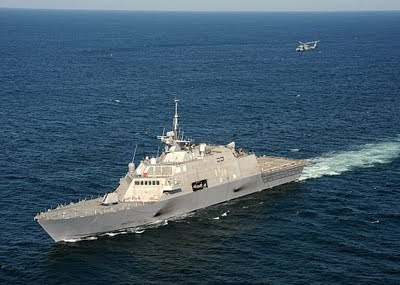 WASHINGTON (NNS) -- The Navy announced Oct. 13 the decision to deploy the USS Freedom (LCS 1) in early 2010 to the Southern Command and Pacific Command areas ahead of her originally scheduled 2012 maiden deployment.

"Deploying LCS now is a big step forward in getting this ship where it needs to be – operating in the increasingly important littoral regions," said Adm. Gary Roughead, chief of naval operations. "We must deliver this critical capability to the warfighter now."

The Freedom will have an immediate impact on fleet readiness and global reach as an asset with unique combat capabilities and the ability to meet littoral tasking not previously seen in the modern cruiser or destroyer fleet.

"The Navy plans to build a considerable number of littoral combat ships which will form the backbone of our future fleet," said Adm J. C. Harvey, Jr., commander, U.S. Fleet Forces, charged with executing the early deployment. "The sooner we integrate them into our fleet, the sooner we can incorporate them in the order of battle. This deployment offers a golden opportunity to learn by doing. Employing the USS Freedom in theater two years ahead of a normal timeline allows us to incorporate lessons that can only be learned in a deployment setting more quickly and effectively in the LCS fleet integration process."

In evaluating options for deploying the Freedom earlier than originally scheduled, the Navy took into consideration several key factors including combat systems testing, shakedown of the ship systems and overseas sustainment with a new concept of operations and crew training. To facilitate the early deployment, the Navy adjusted the Freedom testing schedule, prioritized testing events needed for deployment and deferred others not required for the missions envisioned during this deployment. The Freedom recently completed Industrial Post Delivery Availability 2, which also supported an early deployment.
at 10/14/2009 10:26:00 AM