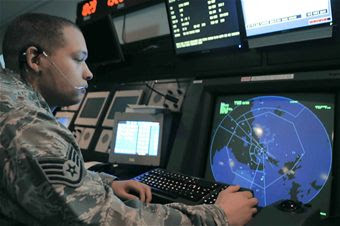 "This is the first Air Force DASR to be located outside of the military installation," Chief Lavoie said. "This location provides us with line of sight to the runways at both airports and provides us with a clearer digital presentation which reduces our maintenance team's workload on a daily basis."

The system does this by automatically transmitting digital radar to the standard terminal automation replacement system. This process eliminates the electronic conversion that was necessary when using traditional airport surveillance radar signals, and decreases the amount of time used to convert an electronic signal into a digital signal.

"The implementation of the DASR is landmark for us as controllers," Chief Lavoie said. "We have lived with 1960s technology until today and our controller force now has state-of-the-art equipment to provide the safest air traffic control service possible to our military and civilian flying communities."
at 10/31/2009 05:47:00 AM