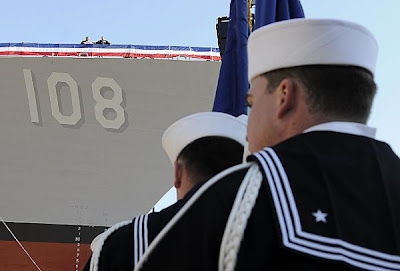 Designated DDG 108, the new destroyer honors the late Navy rear admiral who led the development of Aegis, the first fully integrated combat system built to defend against air, surface and subsurface threats. Meyer was regarded as the father of the Navy's Aegis Weapons System.

Adm. Mike Mullen, chairman of the Joint Chiefs of Staff, will deliver the ceremony's principal address. Adm. Gary Roughead, chief of naval operations and the first officer to have commanded both an Aegis cruiser and destroyer, will also deliver remarks. Anna Mae Meyer will serve as sponsor of the ship named for her late husband. The ceremony will be highlighted by a time-honored Navy tradition when she gives the first order to "man our ship and bring her to life!"

Wayne E. Meyer is the 58th of the Arleigh Burke-class destroyers and carries the 100th Aegis Combat System built. The ship will be able to conduct a variety of operations, from peacetime presence and crisis management to sea control and power projection. Wayne E. Meyer will be capable of fighting air, surface and subsurface battles simultaneously and contains a myriad of offensive and defensive weapons designed to support maritime warfare in keeping with "A Cooperative Strategy for 21st Century Seapower," the maritime strategy that postures the sea services to apply maritime power to protect U.S. vital interests in an increasingly interconnected and uncertain world.

Cmdr. Nick A. Sarap Jr., born in Richmond, Va., and raised in Zanesville, Ohio, will become the first commanding officer of the ship and lead the crew of 276 officers and enlisted personnel. The 9,200-ton Wayne E. Meyer was built by Bath Iron Works, a General Dynamics company. The ship is 509 feet in length, has a waterline beam of 59 feet and a navigational draft of 31 feet. Four gas turbine engines will power the ship to speeds in excess of 30 knots.
at 10/09/2009 09:09:00 AM