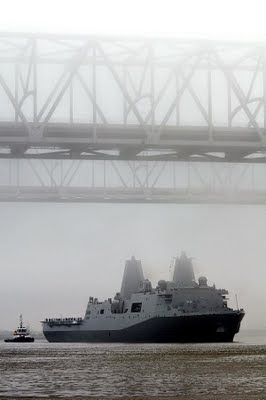 NEW ORLEANS (NNS) -- Thousands of residents from around the New Orleans area began lining up along the banks of the Mississippi River before daybreak to bid the Pre-Commissioning Unit New York farewell as it departed from the Northrop Grumman Shipbuilding in Avondale, La., Oct. 13.

Lola Lass, President of The Greater New Orleans Executives Association (GNOEA), said her group suggested the send-off celebration to allow the community one final opportunity to salute the ship, its crew and the men and women who spent more than five years building it.

"The "Line the Levees" event showcased the hard work, love and dedication that went into building this ship," said Lass. "It allows citizens of New Orleans to pay homage to the victims, families and first responders of 9/11." 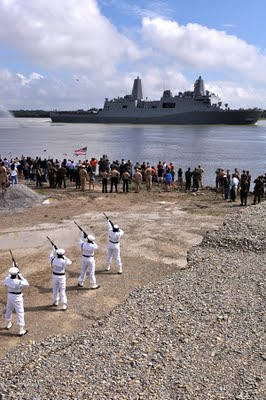 The ship's motto is "Strength forged through sacrifice. Never Forget."

"I'm thrilled to have witnessed history," said Snyder. "There has been overwhelming support for the US Navy in this area. I'm thrilled that so many people took time out of their days to participate in this event."

Snyder also thanked parish leaders and volunteers who participated in the event, citing the long hours spent preparing for the ship's transit down the river.

"Plaquemines Parish officials have been dynamic in their support," said Snyder. "Granting us access to the site and the security support from their sheriff's department was key in preparing for such a large event."

Master-at-Arms 1st Class (SW) Derrick Tyler, assigned to NAS JRB's security department, said he was impressed by the immense turnout and support throughout the area.

"When you see hundreds of every day citizens waving flags and holding up signs, it can be very powerful," said Tyler. "You are used to that seeing ships return or go on a deployment, but when I saw this one leaving it felt different. America wants to this ship to do amazing things."

New York will be commissioned Nov. 7 in New York. The New York is the fifth amphibious transport dock of the San Antonio class. The ship was named New York after the state and her motto is "Strength Forged through Sacrifice. Never Forget." 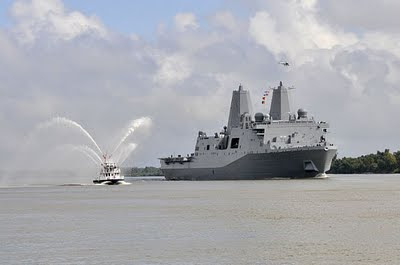