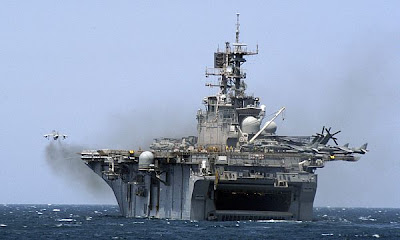 Bataan Amphibious Ready Group is scheduled to participate in a number of coalition events throughout the naval exercise portion of Bright Star.

"Exercise Bright Star will provide the ARG/MEU another important opportunity to reinforce positive relationships and gain experience in operating with coalition counterparts," said Col. Gareth F. Brandl, commanding officer of the 22nd MEU. "Since May, the MEU has participated in five bilateral training events with countries in Europe and the Middle East. Bright Star is will be another chance for us to showcase the naval character, amphibious expertise and flexibility of the Navy and the Marine Corps."

For the first time, the MV-22B Osprey will appear at Bright Star. The aircraft from Marine Medium Tiltrotor Squadron 263 (Reinforced) are scheduled to provide assault support lift. Today, the aircraft were part of an amphibious assault demonstration.

Bright Star, the longest running exercise in the United States Central Command's Area of Operations, was established in 1981 as a result of the Camp David Peace Accords. Highlights of this year's exercise will include a naval exercise, a multinational amphibious assault demonstration, a multinational paratrooper jump involving 600 Soldiers and a combined arms live-fire exercise.

"The presence of Bataan Amphibious Ready Group will provide a fitting backdrop for the events of Bright Star as the U.S. continues to show its commitment and resolve for regional security and cooperation with our partner nations," said Capt. Jack Sotherland, commanding officer of Amphibious Squadron 2. "Having U.S. and coalition units train together will enhance future interoperability, develop better understanding between both land and maritime forces, and most importantly, strengthen bonds between nations."