U.S. and Brazilian Navies Work Together During Joint Warrior 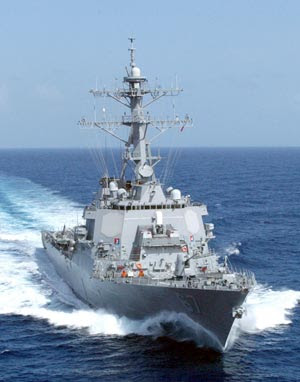 Brazilian frigate BNS Defensora (F 41) is conducting combined operations with the guided-missile frigate USS John L. Hall (FFG 32), and the guided-missile destroyers USS Cole (DDG 67) and Ramage (DDG 61). This collaboration is an excellent opportunity for both Brazilian and U.S. Sailors.

"Commander, U.S. Second Fleet has three focus areas; the third focus area is enhancing our relationship with allies and partners," said Capt. John Kersh, DESRON 24 commodore. "We very aggressively sought out ways to work with other navies, such as Brazil, to enhance our relationships with these allies and partners."
Defensora reacted to scenario-driven exercises, such as small boat attacks, boarding operations, air defense and anti-submarine warfare.

Defensora also brings unique assets to the exercise, such as an AH-11A Super Lynx Mk21A and combat divers. Both were recently used to assist Cole's visit, board, search and seizure team during a counter-piracy exercise.

"The performance of the boarding team from Defensora was spectacular," said Kersh. "The Brazilian combat divers demonstrated great airmanship when they landed on the 'pirated' vessel."

"It was wonderful to see our friends come alongside of us to do a combined operation with our ship," said Cole's Commanding Officer Cmdr. Edward Devinney. "This relationship is a great step forward and I hope in the future we can continue to work with them."

Defensora's Commanding Officer Cmdr. Antonio Capistrano said that Joint Warrior has proven to be a great way for the Brazilian Navy to integrate with and learn from U.S. ships.