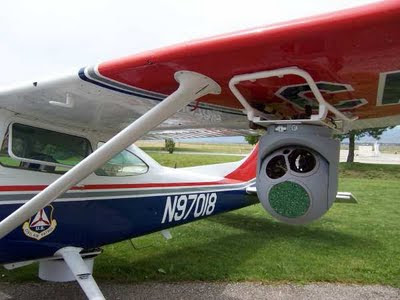 A Predator sensor ball is mounted underneath the left wing of this Civil Air Patrol Cessna 182, turning the aircraft into a ‘Surrogate Predator’ suitable for pre-deployment training for Army and Marine forces. (Photo by Lon Carlson, L-3 Communications)

MAXWELL AIR FORCE BASE, Ala. – With the conversion of a Civil Air Patrol plane into a “Surrogate Predator,” the U.S. Air Force is relying on its auxiliary in a most imaginative way.

“We’re using a manned aircraft to simulate an unmanned aircraft,” said CAP-U.S. Air Force Commander Col. Bill Ward, explaining that a sophisticated “Predator ball” placed under the left wing of a Cessna 182 belonging to CAP will give the plane the capability of mimicking the Air Force’s MQ-1 Predator and MQ-9 Reaper, unmanned aircraft that provide real-time data to U.S. warfighters.

The Air Force will use the Surrogate Predator to fill a critical training gap in support of Army and Marine forces as they prepare for deployment. “Due to the Air Force maximum surge effort to provide more MQ-1 Predator and MQ-9 Reaper support to ground units in CENTCOM, there are no Predator or Reaper forces available to support predeployment exercises such as Green Flag, which focuses on air-to-ground operations,” said Maj. Matt Martin, chief of the Predator / Reaper Ops Branch of Air Combat Command at Langley Air Force Base, Va. “The Surrogate Predator is the solution.”

Air Combat Command (ACC), with the support of Joint Forces Command, secured $2.5 million for the Surrogate Predator Program, once it was determined that CAP could provide the needed training with its dedicated patriotic citizen volunteers at a fraction of the cost of the private contractor currently providing the training.

“We’ve seen nothing but enthusiasm and a willingness to help from the Civil Air Patrol, which is why we chose them to do this mission,” said Martin.

With the Predator ball in place, the CAP plane-turned-Surrogate Predator has the capability of locking onto a target and tracking it, said Ward, adding that the ultimate goal is to broadcast streaming video. “This will give our soldiers and Marines a real-time view of what is going on,” he said.

Beginning this month, ACC will provide mission training to selected CAP crews at Fort Polk, La. “ACC experts will train the CAP crews on how to do the mission using the same tactics, techniques and procedures that Predator crews use on combat missions,” said Martin.

“Basically, we will imitate being a Predator,” said Capt. David Lewis, the Louisiana CAP project officer and one of six CAP pilots initially chosen for the program, who described the joint exercises like Green Flag as “the next big thing for CAP in homeland security and the defense of our country.”

Lewis and the other CAP pilots have prior military experience, which is a requirement for the program. The pilots and their aircrews – a cadre of 18 CAP volunteers in all – will be needed, in the program’s initial stages. Many more CAP volunteers will be involved as the program expands in the coming months. The ACC mission training will qualify them to provide air interdiction, close air support and intelligence / surveillance / reconnaissance support to ground forces. After a formal certification, these crews will be able to fly realistic Surrogate Predator missions. ACC will closely monitor the program and will use Air Force operators with real-world Predator or Reaper experience to assist.

“This initial cadre will then train the dozens of crews that will be needed to sustain our regular Green Flag support,” said Martin. A second airplane is already being modified to expand the Surrogate Predator Program. Once complete, CAP will be able to provide coverage for both Green Flag East exercises from Fort Polk, La., and Green Flag West exercises from the National Training Center at Fort Irwin, Calif., close to where the second Surrogate Predator will be stationed in Las Vegas, Nev.

Green Flag exercises typically involve 11 days of flying, eight hours per day, at least 10 times per year, and “hunterkiller scenarios,” in which the Surrogate Predator starts by surveying targets and providing full-motion video to the brigade combat team. “Once a target is identified by the ground commander as hostile,” Martin said, “the Surrogate Predator will dynamically re-task into the strike role and coordinate with a forward air control to simulate the delivery of precision ordnance onto a target.”

Lewis foresees the potential of the Surrogate Predator for other CAP missions, like search and rescue and emergency services following hurricanes. “In the event of a natural disaster, the aircraft will certainly be made available to NORTHCOM for civil response purposes,” said Martin. “However, due to the expense of the aircraft and the need to keep them available to support joint exercises, we don’t anticipate using them to train for standard CAP missions.”

“Everyone involved is excited,” said Col. John Varljen, vice commander of CAP’s Southwest Region, which includes Louisiana Wing. CAP takes possession of the first Surrogate Predator this weekend. “This is an important mission, a real-world mission,” said Varljen. “It is our contribution to the war effort.”

Homeland security missions are nothing new to CAP, which has played a role in protecting America since its beginning days patrolling the Atlantic Coast for enemy aircraft and chasing German submarines during World War II. With its fleet of 550 aircraft, as well as numerous ground assets, and a force 58,000-strong, CAP is considered a force multiplier at a very attractive cost.

“The Civil Air Patrol is grateful for this new opportunity to aid in the defense of America,” said CAP National Commander Maj. Gen. Amy Courter. “Our members are true patriots, who volunteer to serve and professionally execute their duties with excellence every day. They truly go above and beyond the call of duty in service to this great nation.”

Ward predicts the Surrogate Predator Program will be “a real success story” for Civil Air Patrol. “I think it’s going to highlight CAP more than it already is to the Department of Defense,” he said.

Civil Air Patrol, the official auxiliary of the U.S. Air Force, is a nonprofit organization with 58,000 members nationwide. CAP performs 90 percent of continental U.S. inland search and rescue missions as tasked by the Air Force Rescue Coordination Center and was credited by the AFRCC with saving 91 lives in fiscal year 2008. Its volunteers also perform homeland security, disaster relief and counter-drug missions at the request of federal, state and local agencies. The members play a leading role in aerospace education and serve as mentors to the more than 23,000 young people currently participating in CAP cadet programs. CAP has been performing missions for America for more than 67 years.
at 10/13/2009 06:32:00 AM