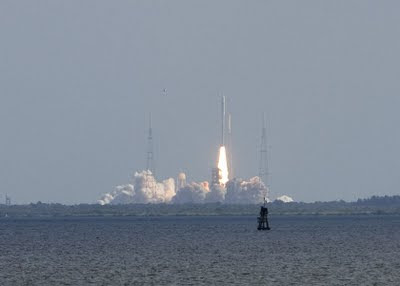 Personnel from throughout the 45th Space Wing provided vital support, including weather forecasts, launch and range operations, safety and public affairs. The wing also provided its vast network of radar, telemetry, optical and communications instrumentation to facilitate a safe launch.

"The success of this test launch helps to pave the way for future space exploration," said Brig. Gen. Edward L. Bolton Jr., 45th Space Wing commander. "We're very pleased to continue supporting NASA and its partners as we write the next chapter in human space flight here on the Eastern Range."

The Ares I is the first rocket developed for NASA's Constellation Program, tasked with developing vehicles necessary to carry astronauts on future journeys of exploration. This mission provided an opportunity to test and prove the new rocket's flight characteristics, hardware, facilities and ground operations. 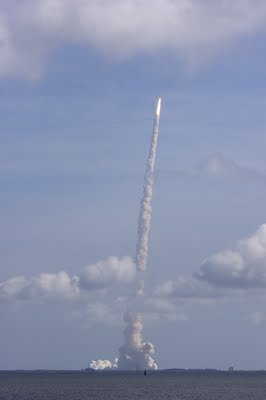 Thanks to one of our MMP reporters for passing along his photos of the launch. In the first Ares I-X photo, one of NASA's UH-1's can be seen just to the left of the rocket. Our reporter guessed he was near the east shore of the Indian River or the SLF, still 4-6 miles from the pad. His location was 11.5 miles from Pad 39A on the west shore of the river. Thanksto the Hammer for his photos.
at 10/28/2009 01:12:00 PM