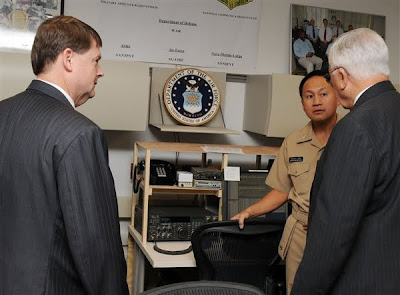 WASHINGTON - A military institution designed to provide emergency communications has moved to new quarters in the Pentagon.

John G. Grimes, the former assistant secretary of defense for networks and information integration, cut the ribbon on the new Military Affiliate Radio System (AAN3PNT-LVH) office on the fifth floor of the Pentagon on October 21.

The facility is packed with shortwave radios, radio-telephone patches, computers and data links. It is manned by the Pentagon Amateur Radio Club. "This is a great facility, manned totally by volunteers," Grimes said. "It's a crucial capability for our country."

The system - known by the acronym MARS - began in the early 1950s. It was a worldwide network of shortwave radio enthusiasts who would spring into action in the event of a nuclear war or natural disaster. Thousands of civilian and military ham radio volunteers manned the system.

"In the years before the Internet, deployed servicemembers kept in touch with families and friends using MARS," said Gary Sessums, a contractor in the Pentagon and one of the stalwarts of the radio club.

From the Korean War to the Gulf War, soldiers, sailors, airmen and Marines used "Marsgrams" to keep in touch. Ham radio operators called these "health and welfare" messages.

The shortwave broadcasts have been superseded by the Internet, and servicemembers in many parts of the U.S. Central Command area can use cell phones and voice over Internet protocol to speak with those back home. Still, in the event of an emergency, high-frequency communication is generally the first to recover, and even the most modern technology can get overloaded.

Allan Hubbert, a volunteer in the Pentagon, noted communication problems during President Barack Obama's Jan. 20 inauguration as an example. "During the inauguration, there were so many people on cell phones that it overloaded the system," he said. "We could still operate, and helped back up the system down on the [National] Mall."

More than 60 volunteers help to man the Pentagon node of the system. They will turn out in force to help with communications for the Marine Corps Marathon, which will be held in the area this weekend. "In that case, we can help act as a bridge between the military and various local and regional agencies," said Navy Capt. Rich Low.

With more than 6,000 volunteers worldwide, the system now also backs up the Department of Homeland Security. "There have been many crises or disasters that have struck where the first word out of an area is via [shortwave radio], and someone has their little gas generator going," Grimes said. "That's not likely to change any time soon."

You can learn more about this new Pentagon Radio Station (Amateur and MARS) on the PARC website at http://www.k4af.org/. 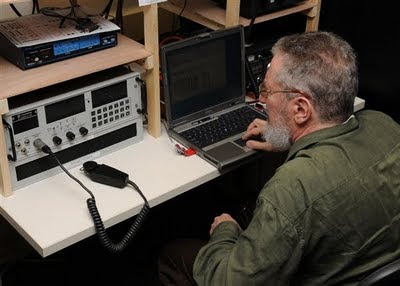