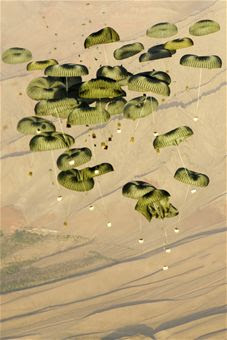 Pallets of cargo drop from a C-17 Globemaster III to a forward operating base in Afghanistan, Aug. 27, 2009, in support of Operation Enduring Freedom. The aircraft is assigned to the 817th Expeditionary Airlift Squadron. (U.S. Air Force photo/Staff Sgt. Michael B. Keller)

"The Air Force airdrops are providing needed support to Soldiers in the field; getting people and parts to our guys in the (forward operating bases) and in the mountains," said Army Chief Warrant Officer 3 James Wright, deployed to Afghanistan from the 101st Airborne at Fort Campbell, Ky.

"The Air Force is doing a great job and it's great to have them out here," he said.

Time-sensitive, mission-critical requirements reflect the Army commander's immediate priorities for delivery of equipment, supplies and personnel. These requirements are generally non-routine in nature and need to be delivered to their location very quickly. This is where the direct support mission steps in and meets those requirements.

In the U.S. Central Command area of responsibility, Air Force members have assets coordinating with the Army on missions. For example, as of Aug. 31, 2009, Airmen airdropped more than 8.6 million pounds of cargo for the year supporting Army Soldiers and Marines in remote areas of Afghanistan, according to figures from the Combined Air Operations Center in Southwest Asia. Between January and April, an average of up to 900,000 pounds of cargo per month was airdropped. From May through August, the monthly airdrop rate rose and averages between 1.1 million and 1.6 million pounds per month.

The airdrop increase also highlights the fact that over the past two years, new types of airdrops have helped meet the demand such as the Joint Precision Airdrop System and the Improved Container Delivery System. Both JPADS and ICDS airdrop platforms utilize a GPS-guided assist in their use which has allowed for airdrops from higher elevations and in all sorts of weather. Additionally, use of the C-17 Globemaster III as an airdrop plane has more than doubled since 2007 taking on more than 72 percent of all airdrops in 2009 compared to 30 percent two years ago.

"If the Army asks us for something, particularly with airdrops or otherwise, we've been able to fulfill their requests 100 percent of the time," said Col. Keith Boone, chief of the CAOC's Air Mobility Division. "Take for example this past summer in Afghanistan. The Army required us to provide more airdrops and we've met every one of their requests. That's our commitment -- 100 percent -- to meeting their direct support needs."

In 2009, mobility Airmen have demonstrated the fulfillment of quick-response, direct support requirements within the CENTCOM area of responsibility. In the first seven months of 2009, the Air Force met more than 750 distinguished visitor movements and over 250 urgent aeromedical evacuation movements from both Iraq and Afghanistan.

Army Sgt. Angel Quiles Ramos, from Charlie Battery, 1st Battalion, 43rd Air Defense Artillery deployed to an undisclosed base in Southwest Asia, said the support he receives from the Air Force at his deployed base is "critical."

"They provide food, security and water," Sergeant Ramos said. "We don't have to get water because they bring it to us. If anything breaks, we call them and they come to fix it. This is critical because the Air Force provides everything so we can do the mission."

As far as the feedback the Air Force received, Army Gen. David Patraeus, the CENTCOM commander, noted how mobility forces are doing well for CENTCOM.

"There is an old military saying that amateurs talk tactics; professionals talk logistics," General Patraeus said. "(U.S. Air Forces Central) talks -- and does -- both. To be sure, AFCENT's tactical operations -- supporting our troopers on the ground in Iraq and Afghanistan have been exceptional...the logistics accomplishments have been exceptional, too. Moving the mass formations of troopers and the iron mountain of materiel to perform our missions would be impossible without the phenomenal airlift support provided by the men and women of AFCENT."

As the CENTCOM commander confirmed, the Air Force is fully committed to its deployed mission, particularly its mobility mission. In the direct support mission, that full commitment will continue as new doctrine is developed. As Air Force support to the Army's time-sensitive, mission-critical requirements becomes more mature, the best practices will be captured in joint and service doctrine, tactics, techniques and procedures and service manuals.
at 10/28/2009 08:01:00 AM