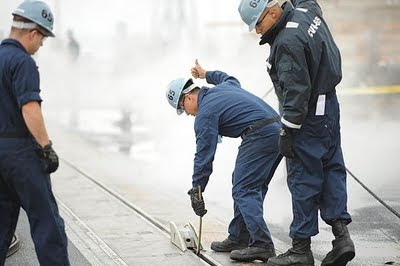 The event marked a huge milestone and brought the Enterprise and her crew members one step closer to leaving the shipyard and returning to operational status.

The Enterprise's catapult was put through a series of no-load checks to ensure its launching valves and steam pistons were in proper working condition. Additionally, the checks were used as a preliminary tool for catching any unexpected issues or operational malfunctions.

"These no-load checks are essential to the safety of our crew members and our pilots," said Chief Aviation Boatswain's Mate Equipment (AW/SW) Jason W. Hosler, the bow catapult shop's leading chief petty officer. "We must do them before any aircraft can be launched from the flight deck to ensure there aren't any leaks or hidden debris in the catapult track that could cause big problems later."

With the catapults sitting stagnant for almost two years, it's no surprise that the Sailors of Air Department's V-2 Division spent many long hours to prepare for the event. They fixed several issues by performing corrective and preventive maintenance evolutions such as water-brake jobs, piston rebuilds, launch-valve repacks and retraction-engine rereads.

Although their work was more behind-the-scenes than that of Air Department Sailors, Reactor and Engineering Department's Sailors also played a vital role in making the event a success. Reactor Department generated the steam while the engineers held and accurately pressurized it for Air Department's use.

"Our job is to make sure the steam pressure is adequate for catapult operations," said Chief Machinist's Mate (SW/AW) Richard M. Lewis, the catapult steam shop's leading chief petty officer. "Although we are separate in everything we do, it takes all three departments coming together to make flight operations possible."

Ultimately, there is still a lot more work to do before Enterprise will be ready to launch birds again, but the event proved to be a step in the right direction.

"The testing of catapult 3 was a huge success, and we have just as much confidence in moving forward and testing the remaining three," said Hosler. "The whole purpose of an aircraft carrier is to launch aircraft, and after each one of these catapults have been thoroughly tested, we will be ready to do that."

Enterprise is currently undergoing a maintenance period in the Northrop Grumman Newport News Shipyard and training to maintain proficiency in preparation to return to the fleet.
at 10/30/2009 06:38:00 AM