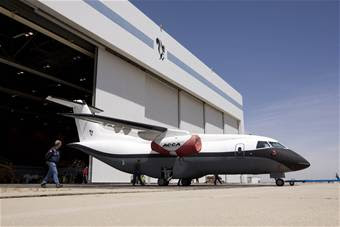 The Advanced Composite Cargo Aircraft is rolled out of a hangar in May 2009 at Lockheed Martin's Skunk Works, Air Force Plant 42 in Palmdale, Calif. The ACCA is a modified Dornier 328J aircraft. The Air Force Research Laboratory at Wright-Patterson Air Force Base, Ohio, oversees the ACCA program. (Courtesy photo)

The X-55A is a technology demonstrator for the design and manufacturing of future aircraft using advanced composite materials. The X-55A is a modified Dornier 328J aircraft with the fuselage aft of the crew station and the vertical tail removed and replaced with completely new structural designs. These designs are made from composites using new out-of-autoclave curing techniques. The test platform contains some 600 accelerometers and stress gauges.

"We're extremely proud to have been awarded X-designation," said Barth Shenk, X-55A program manager with the Air Force Research Laboratory's Air Vehicle Directorate. "We hope to take this testing to the next phase to further mature our understanding of composite materials, how they behave in flight and how they age. This effort may drastically change the way we manufacture future military and civilian aircraft."

The strength, light weight, ease of manufacture and corrosion resistance are just some of the composite materials characteristics Air Force officials want to use the X-55A to explore, Mr. Shenk said.

The X-55A was made possible by a 10-year AFRL-led research and development investment called the Composite Affordability Initiative. Government labs including NASA worked collaboratively with industry to develop advanced materials and manufacturing technologies, Mr. Shenk said.

The ACCA was conceived by AFRL as a fast-track, low-cost development effort. Working with Lockheed Martin's Skunk Works, it was designed in 5 months, then built and flown 20 months after the go-ahead. The aircraft was built at half the estimated cost of a conventional design of the same size, according to Mr. Shenk.

Phase III of the program was awarded to Lockheed Martin Sept. 17 and plans to fully expand the flight envelope and characterize the structure, examine reliability and longevity of the design and baseline the X-55A as a test-bed for other technologies.

According to Mr. Shenk, the X-55A program has already demonstrated the feasibility of designing and manufacturing large, bonded unitized structures featuring low-temperature, out-of-autoclave curing. The fuselage was constructed in two large half-sections (upper-lower) featuring sandwich construction with MTM-45 skins and Nomex core, bonded together with adhesive and ply overlays along the longitudinal seam rather than numerous frames, stiffeners and metal fasteners used commonly in traditional aircraft. The vertical tail was designed using tailored stiffness technology. These were joined with an existing Dornier 328J cockpit, wing, engines and horizontal tail. 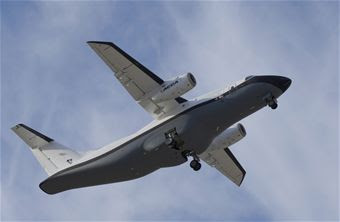 The Advanced Composite Cargo Aircraft makes its first test flight June 2, 2009, from Air Force Plant 42 in Palmdale, Calif. The ACCA is a modified Dornier 328J aircraft. The fuselage aft of the crew station and the vertical tail were removed and replaced with completely new structural designs made of advanced composite materials fabricated using out-of-autoclave curing. It was developed by Air Force Research Laboratory and Lockheed Martin officials. (Courtesy photo)
at 10/22/2009 09:16:00 AM