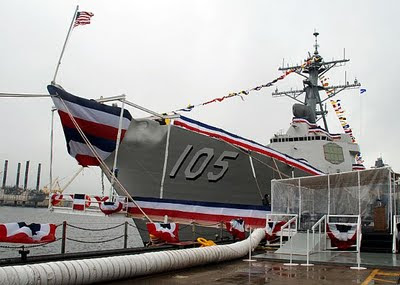 The event will be the first time a U.S. Navy warship has been commissioned at Seal Beach.

Deborah Mullen, wife of Adm. Mike G. Mullen, chairman of the Joint Chiefs of Staff, is the ship's sponsor. She had previously christened the ship during a ceremony at Northrop Grumman Shipbuilding in Pascagoula, Miss., Jan. 26, 2008.

The new destroyer honors Adm. George Dewey, most famous for leading his squadron of warships into Manila Bay April 30, 1898, and destroying the Spanish fleet in only two hours without a single American loss. A popular hero of his day, Dewey was commissioned admiral of the Navy, a rank created for him, in March 1903.

Dewey, designated DDG 105, is the 55th of 62 Arleigh Burke class destroyers either in commission, under construction or on order. The ship will be able to conduct a variety of operations, from peacetime presence and crisis management to sea control and power projection. Dewey will be capable of fighting air, surface and sub-surface battles simultaneously and contains a myriad of offensive and defensive weapons designed to support maritime defense.