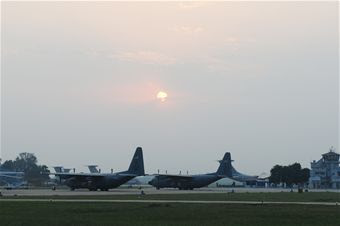 "This is the first time in our partnership that we've had the United States and India forces jump out of a C-17," Capt. Billy Dye, a pilot from the 535th AS, and Greensboro, N.C. native said. "It's great that we get to share the capabilities of our aircraft with one another."

More than 160 U.S. Airmen and Soldiers, along with three C-130H Hercules, a C-17, and C-130J are participating in the exercise with an Indian air force IL-76 Gajraj, four AN-32 Sutlejes, two MI-17 Prataps and one Cheak Alouette III.

"Cope India allows our countries the ability to exchange humanitarian airlift, air land and airdrop delivery techniques," Captain Dye said. "And we look forward to continuing to foster theses great relationships that we are already making."

Cope India is an airlift exercise that focuses on the humanitarian assistance and disaster relief operations. Additionally, U.S. and Indian air forces will participate in aeromedical and disaster management exercises and several subject matter expert exchanges during the exercise.
at 10/23/2009 09:36:00 AM