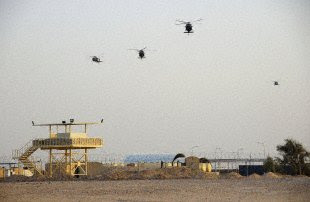 This was the third in a series of three exercises involving the aviators from Task Force Keystone.

The training mission started as a real mission would, with a thorough briefing. The aviators and crew reviewed the landing zone, the aircraft's landing direction, a timeline, landing formation, maps, routes and contingency plans.

First Lt. Thomas Kivlen, platoon leader in Co. B from Plainsboro, N.J., stressed the importance of the training.

"The stuff we are doing here directly relates to what those Soldiers may have to do in the future," said Kivlen. "This will directly help prepare for future missions and assaults."

Chief Warrant Officer 2 Danielle Wolak of Reading, Pa., one of several pilots who participated in the training mission, said the training was especially gratifying for her.

"I was here in 2003 when everything was starting and now I'm here near the very end," said Wolak, a Pennsylvania National Guard Soldier. "It's nice to know that we're helping them take back their country and we're training them for what they're going to need to do when we're gone."

"For future operations, they can do this on their own," said Braun, referring to the Iraqi forces. "When we leave, they should be able to do their own air assaults and support their own operations."

The pilots agreed the transition process is already well underway. According to Wolak, her unit has operated with ISF.

"We do everything hand-in-hand with the Iraqis," said Wolak. "Everything is in coordination with [Iraqi army and Iraqi police], so they know what is going on," she said.