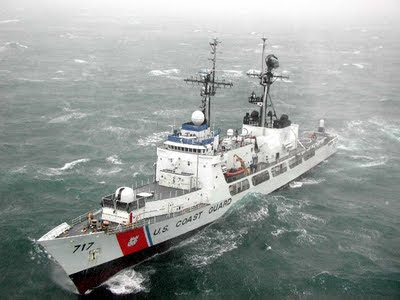 KODIAK, Alaska -- The Coast Guard, in partnership with Alaska Department of Fish and Game personnel, are deploying to safeguard the crab fleet departing today for the start of the 2009 - 2010 crabbing season in the Bearing Sea. (photo by PA1 Keith Alholm)

In anticipation of the increased number of vessels operating in the region, the Coast Guard has again forwarded deployed assets to the Aleutian Island Chain and the Bering Sea to provide for more rapid response should the need arise.

An MH-60 Jayhawk helicopter and crew from Air Station Kodiak are prepositioned in Cold Bay for the red king crab fishery and will transition to St. Paul around January to be ready to respond during the Opilio crab fishery.

The Marine Safety Detachments in Kodiak and Unalaska, as well as a small contingent of examiners in King Cove, conducted safety training with the fleet. According to the Alaska Department of Fish and Game, 62 vessels will be on the fishing grounds out of the 93 that pre-registered for the red king crab fishery.

The Coast Guard Marine Safety Detachment in Unalaska conducted exams aboard 41 of the 93 vessels. No overloading of pots was noted. A few deficiencies, namely expired life rafts, hydrostatic releases and electronic position indicating radio beacon batteries were found during the Coast Guard safety checks. All deficiencies were confirmed corrected prior to the vessels getting underway.

The Alaska Department of Fish and Game deploys observers aboard approximately 20 percent of the fleet for the duration of their fishing operations. A current Coast Guard dockside examination decal is required to carry an observer. Fishermen who do not already have a valid decal for this season can call the Seventeenth Coast Guard District Fishing Vessel Safety Coordinator at 1-800-478-7369 or their local Marine Safety Detachment for help with locating a dockside examiner in Alaska.

Fishermen are also asked to notify the Coast Guard 24 hours before a vessel's initial departure from port, any crab vessels with crab pots aboard must notify the Coast Guard via telephone or fax and provide the following information; (1) the name and official number of the vessel, (2) name of the person making the notification (3) number of pots aboard and maximum number of pots their stability letter allows for and (4) the expected time of departure. This information allows Coast Guard examiners to ensure a season safety check has been performed on the vessel.