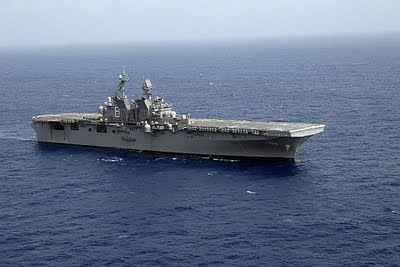 The ship dubbed the "Prius of Navy warships," arrived in San Diego in mid-September, three years after her christening. She brought over 1,000 Sailors and their families to the San Diego community.

"I am proud this ship, and that her Sailors, Marines, and families will all call San Diego 'home'," said Congresswoman Susan Davis, the senior U.S. government official present. "It is great to have a new, 'green,' addition to San Diego. Each of you contributes to mission success and to our great community."

"USS Makin Island represents the US Navy's long standing commitment to both the defense of our nation and ensuring security and stability in the Asia-Pacific region and beyond," said Walsh. "This commissioning also marks a new and significant chapter in the US Navy's history. The Navy will look to the USS Makin Island as the example as we move aggressively forward with plans to reduce our reliance on fossil fuels and other hazardous chemicals."

Makin Island is the final amphibious assault ship built in the LHD-1 Wasp-class, but is the first of the class built with gas turbine engines and electric drive. The Navy projects that this advance will save nearly $250 million in fuel costs over the ship's lifetime. The development is already paying off – during the ships transit from Pascagoula, Miss., to San Diego, Makin Island consumed over 900,000 gallons less fuel than a steam ship completing the same transit, saving more than $2 million in fuel costs. Other environmentally-friendly initiatives include the use of an electric plant to power auxiliaries, meaning no steam or associated chemicals; and the use of reverse osmosis water purification systems that negate the need for chemicals like bromine or chlorine.

It was quite a day for Capt. Bob Kopas, commanding officer, USS Makin Island, who guided the ship and her Sailors through over four years of construction and trials. He gave thanks to the crew for working together to reach a momentous occasion.

"You have shown the metal you are made of every day," Kopas said. "In Mississippi you demonstrated your humanity by rebuilding playgrounds that were destroyed by Hurricane Katrina, and during our port visits in South America you demonstrated your compassion by volunteering your off-duty time to renovate schools and other community facilities. Over the past four years, the dedication and enthusiasm you have shown has been the 'flames' which have heated the metal of our ship, making her able to meet the challenges of our nation and the Navy over the next 40 years and beyond."
at 10/27/2009 07:55:00 AM