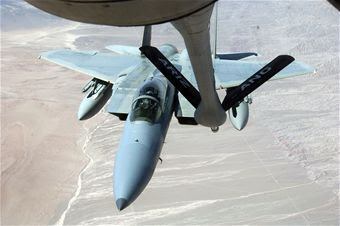 The Airmen from the 161st Air Refueling Wing in Phoenix are participating in the Chilean-led exercise that runs through Oct. 31 involving the United States, Brazil, Argentina and France.

The exercise focuses on improving interoperability between partner nations in a command-and-control as well as operational environment.

This is just one visit of many in recent years to Chile for the 161st ARW, said Capt. Blake Waldo, a KC-135 pilot and head of mission planning. The tankers refueled Chilean air force F-16s during, participated in numerous exercises, and even made an appearance at the FIDAE airshow.

"The hospitality in Chile is unbelievable," Captain Waldo said. "You can definitely see the partnership. We teach them and vice versa. I love it. It's a 'pinch-me' job. Exercises like Salitre can take the monotony out of the day-to-day job. It's a fortunate position to be in, to go from initial planning to final, and see it come together. It's a pretty neat deal."

The wing deployed 19 Airmen for the two-week exercise, including maintainers, specialists, boom operators and pilots. Most of the Airmen have deployed here before, and Maj. Quinn Casey said he thinks that familiarity is crucial to smooth operations.

"Over time, you create a standard, and everyone is on the same page, no matter if you are in the U.S. or in Chile," he said. "The standards both of our countries have built over time help immeasurably to keep the exercise running and also help the pilots practice. It just proves that what you've developed is working."

During the initial phases of Exercise Salitre, pilots from all nations involved will familiarize themselves with the airspace and procedures for flying within them. To do so requires fuel, and the KC-135 delivered. It can hold more than 200,000 pounds of jet fuel, which means that fighters can stay aloft for much longer.

"It is perfect for us," Major Rios said. "It's a good way to maintain training for our pilots. We try to get as many flights as possible each time the tankers arrive. If the tankers didn't come here, we couldn't maintain proficiency in mid-air refueling."

Exercise Salitre builds cooperative capability for responding to humanitarian crises and promoting regional security through a partnership of nations. There are nearly 200 U.S. Airmen and 10 U.S. aircraft participating, including an HC-130 from the 23rd Wing at Moody Air Force Base, Ga., two Air National Guard KC-135s from the 161st Air Refueling Wing, Ariz., and six F-15 Eagles and one C-130 Hercules from the Louisiana Air Guard's 159th Fighter Wing in New Orleans.
at 10/28/2009 08:06:00 AM