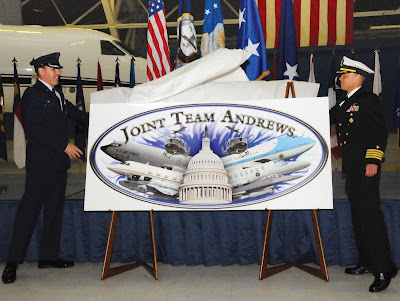 Blog editor note: It is no longer Andrews AFB or NAF Washington. Andrews will now carry the same sort of designator as McGuire now does (Joint Base McGuire-Dix-Lakehurst). Some now you folks in DC have a mouthful to say "Joint Base Andrews Naval Air Facility Washington."

JOINT BASE ANDREWS, Md. (AFNS) -- Andrews Air Force Base was renamed as Joint Base Andrews Naval Air Facility Washington Oct. 1 during a ceremony here in Hangar 1.

The Joint Team Andrews logo was also unveiled at the event, which took place against a backdrop of military hardware representing all aspects of the newly created team.

"Vince Lombardi described teamwork as individual dedication to a group effort," said Navy Capt. Timothy Fox, Naval Air Facility Washington commanding officer. "That is what makes a team work, a company work, a society work, a civilization work, and that is what makes a joint base work."
"Andrews is no stranger to change," said Maj. Gen. Ralph Jodice, Air Force District of Washington commander. "The names have changed, but the commitment to service has remained the same. We are the gateway to the nation's capital, and we are 'all in' here at Andrews."

Since its creation, Andrews has evolved from a Civil War encampment to an Army air field to an Air Force base. The base has been and continues to be a cornerstone military establishment in the National Capital Region.

"The Navy and the Air Force have been cooperating for a long time," said Navy Capt. Catherine Hanft, South Potomac Naval Support Activity command officer. "During the first retaliatory strike against Japan following the attack on Pearl Harbor, a group of Army Air Corps aviators took off in their B-25 bombers from the deck of the U.S.S. Hornet. Since then we have continued to work cooperatively."

Joint Base Andrews is one of two installations in the continental United States to take part in the Base Realignment and Closure proceedings. The other is Joint Base McGuire-Dix-Lakehurst in New Jersey.
at 10/09/2009 09:00:00 AM