PHILADELPHIA (NNS) -- The chairman of the Joint Chiefs of Staff praised the man for whom USS Wayne E. Meyer guided-missile destroyer was named during the ship's commissioning into the U.S. Pacific Fleet here Oct. 10.

"I can think of no finer name for a warship than USS Wayne E. Meyer," Navy Adm. Mike Mullen said during the 58th Arleigh Burke-class destroyer's commissioning here today. "For it is the name of the chief visionary of the Navy's surface fleet."

The ship's motto is "One Powerful Legacy," and the late retired Rear Adm. Wayne E. Meyer can be said to have left exactly that in the Navy. Meyer is described as "the father of Aegis," for his role in leading the development of the Aegis Weapons System now used aboard 100 Navy ships.

Meyer abhorred mediocrity as much as he cared for the Navy, and he attended the commissioning of every ship using the Aegis platform in since that of USS Bunker Hill in 1986, Mullen said.

"It is sad, but almost fitting, in a way, that the first commissioning muster Wayne Meyer misses is that of his namesake," he added.

Originally conceived as a match for the Soviet blue-water navy, Aegis ships have become invaluable for uses beyond deterring Cold War foes.

It was an Aegis ship that recently patrolled at the ready off the coast of North Korea. Another supplied humanitarian aid to the citizens of the former Soviet republic of Georgia during military strife last year, and Aegis ships will continue to provide air defense for expeditionary and carrier strike groups around the world, Mullen said.

"Admiral Wayne Meyer's brainchild has become an enduring staple of our fleet because the system has been able to evolve, to flex to our defense needs as they change over time," Mullen said. "Underpinned by solid systems engineering, … its enduring capabilities are speed agility and adaptability."

Mullen said he sees this as immense progress to what he used to call the "1,000-ship Navy." This is "a global maritime coalition of good neighbors who use the sea to unite instead of divide," he said.

"Because confronting and overcoming the challenges we face today -- whether piracy, narco-trafficking, weapons of mass destruction or terrorism -- will take all of us: all hands, all services, and all partner nations," the admiral said.

The Aegis ships surely have their virtues, but their true worth always will be in their crews, Mullen said.

"The way that Aegis ships have been conceived, built, tested, and deployed is as much a testament to an engineer's mastery of technology as it is to our Sailor's versatility," he said. "The Aegis ships are made to see, control, and defend. Aegis sailors are made to multitask."

Stopping short of offering the Meyer's crew career advice, Mullen chose to share a anecdote from his own career.

"Let me just say that every time we'd meet, Admiral Meyer was fond of telling me that my career peaked, as a captain, the day I left command of [USS] Yorktown," He said. "Now, Yorktown is down the Delaware a bit, in the process of being scrapped.

"[Wayne Meyer's] career, however, is still going strong as we commission this ship today," he added. "Each and every one of you in Meyer's crew has the great honor of getting the chance to live up that name. May you discover and employ the leadership, determination, ingenuity, and perhaps the stubbornness that goes along with it."

Navy Adm. Gary Roughead, chief of naval operations, also attended the commissioning. He reinforced the importance this crew would have as the USS Wayne E. Meyer's first.

"You will man the most capable warship in the world," Roughead said. "You will sail under the name Wayne E. Meyer. No naval officer in recent history has distinguished himself as a visionary, as an innovator, and as a leader, as did Wayne Meyer.

"Even though he only left us a short time ago, his spirit will live on in this ship and in the spirit of the officers and sailors who will serve for generations to come," Roughead added.

Meyer's wife, Anna Mae, is the ship's sponsor and a Philadelphia native. She christened her husband's namesake from Bath Ironworks Shipyard in Bath, Maine, on Oct. 18, 2008.

Navy Cmdr. Nick A. Sarap will command the ship, which will call San Diego home. It carries a crew of 370, and measures in at 509-feet, 5-inches in length. It carries the 100th Aegis weapons system built and delivered by Lockheed Martin. 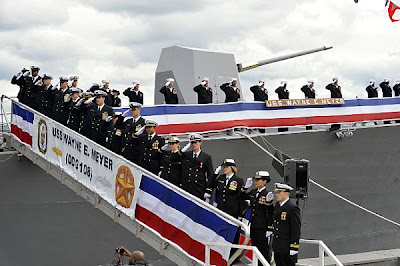