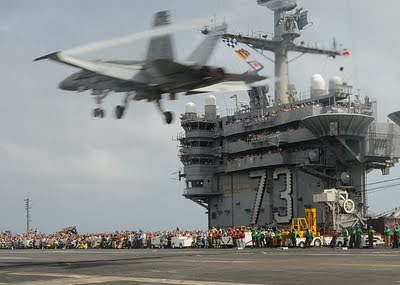 An F/A-18C Hornet, from the Dambusters of Strike Fighter Squadron (VFA) 195, executes a touch and go during an air demonstration aboard the aircraft carrier USS George Washington (CVN 73). George Washington, the Navy's only permanently forward-deployed aircraft carrier, hosted a family and guest cruise after returning from her inaugural summer deployment supporting security and stability in the western Pacific Ocean. (U.S. Navy photo by Mass Communication Specialist Seaman Apprentice Marcos Vazquez/Released)

USS George Washington (CVN 73) recently completed a month-long maintenance and repair period at CFAY after returning from her inaugural summer deployment in the 7th Fleet area of operations Sept. 3.

"As we sail back to sea, we look forward to building upon the successes of our inaugural summer deployment fostering strong and positive relationships with numerous global maritime partners throughout the 7th Fleet area of responsibility," said GW's Commanding Officer Capt. David A. Lausman. "The crew of the George Washington and Carrier Air Wing Five enjoy working closely with navies in complex training environments building interoperability and understanding.

"The real strength in building a true global maritime partnership is an exposure to the manner in which we each analyze and address the various security issues of the region. The unique diversity each partner brings to the problem solving table translates directly to increased security and stability throughout our critical shared maritime environment."

A key element of this year's fall patrol will be GW working alongside the Japan Maritime Self Defense Force as part of the largest and most complex yearly bilateral military exercise between Japan and the United States.

"Our participation in ANNUALEX is important because it enhances the interoperability between the U.S. Navy and Japan" said GW's Operations Officer, Cmdr. Anthony Calandra. "Being able to work closely with the Japan Maritime Self Defense Force allows us to build closer ties with our host country while at the same time helping us to work efficiently as a team in a time of crisis."