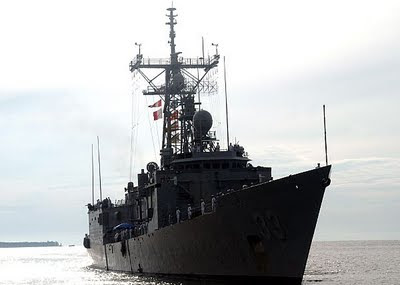 SAN DIEGO (NNS) -- The guided-missile frigate, USS Jarrett (FFG 33), will return to San Diego after an independent six-month deployment to the 4th Fleet area of responsibility (AOR) in the Eastern Pacific Ocean Oct. 19.

"I am very proud of the performance of the crew during this deployment," said Commanding Officer, Cmdr. Ferdinand Reid. "From conducting drug-interdiction operations, and performing community service to operating with partner nations, the men and women of Jarrett, along with embarked air detachment and Coast Guard law enforcement detachments were a cohesive unit. They conducted themselves with the utmost professionalism and performed to a superior level. It is a great feeling to return from a deployment with the knowledge that this great team of warriors made a difference."

Jarrett performed a variety of tasks during the deployment, including drug-interdiction operations that resulted in the apprehension of 12 narco-terrorists and the seizure or disruption of more than nine tons of illicit narcotics with an estimated street value of $266 million.

The ship also made contributions to the Panamanian and Guatemalan people through six community service projects and four "Project Handclasp" deliveries. The donations had a positive impact on the lives of more than 4,000 children.

Jarrett helps provide deterrence, promote peace and security, preserve freedom of the sea and humanitarian/disaster response within 3rd Fleet's 50 million square mile area of responsibility in the Eastern Pacific as well as supporting the Navy's Maritime Strategy when forward deployed.
at 10/16/2009 11:05:00 AM