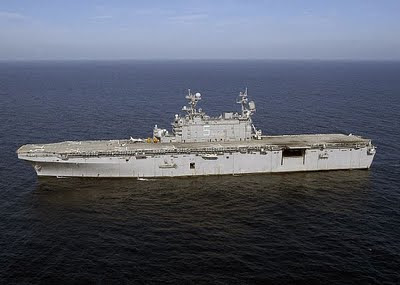 "The props and shafts were taken off to be cleaned, balanced and polished. This reduces wear and tear on the ship and improves mobility," said Lt. Curtis Beers, Peleliu's main propulsion assistant. "This 29-year-old ship can now operate like it's brand new."

Both rudders were overhauled to eliminate the ship's vibration at full throttle. The shafts, rudders and propellers were tested early during the four-day trial as Peleliu glided atop the Pacific at flank speed.

Peleliu's improved mobility was essential while she steamed parallel to USNS Guadalupe (T-AO 200), receiving more than one million gallons of fuel during a four-hour underway replenishment.

"Prior to the maintenance on the steering assembly we would not have been able to execute such a task," said Beers.

With the fuel tanks full, berthings packed and Sailors finding their sea legs again, Peleliu was tested inside and out.

Outside of the ship, a new davit and 11-meter RHIB replaced older equipment to increase Peleliu's mission capabilities.

"It's a big upgrade. We're the first ship to have this model of davit," said Ensign James Dudley, 1st division officer. "The boat is a lot faster than our old boat and easier to maneuver."

Dudley said the RHIB will make any small-boat evolution more efficient, and will be used for force protection, man overboard and inserting search and rescue swimmers.

After eight months in port, Peleliu added many new Sailors not familiar with underway life.

"Everyone insisted I would get sick, but I haven't been sick yet. It's definitely different though." said Machinist's Mate 3rd Class Adam Fogle. "Swaying back and forth while walking around takes some getting used to."

Sea Trials concluded an eight-month, multi-million dollar DPMA period for the Iron Nickel and crew, which is now ready to begin her initial stages of pre-deployment training.
at 10/11/2009 10:18:00 AM