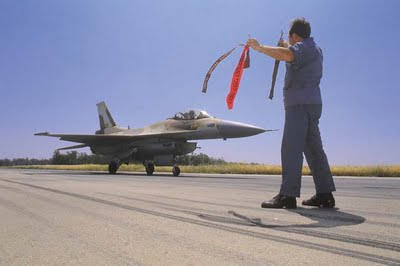 Several US Navy ships just landed in Haifa to conduct a massive wargame with Israel. The Israeli and American militaries are conducting an exercise simulating a multi-front conflict with Iran, Syria, Hezbollah and Hamas. The exercise, codenamed ‘Juniper Cobra 2009,’ is the largest joint US-Israeli drill in history.

Juniper Cobra 2009 will be the largest exercise yet between the IDF and the US Military's European Command (EUCOM) and the US Missile Defense Agency (MDA). Ballistic missile defense will be a central focus of the upcoming exercise.

As part of the upcoming exercise, it is reported that the US is expected to permanently station additional US radar systems in Israel, to serve as an early warning network for potential Iranian missile launches. The US is reportedly also seeking to station additional radar sites in Turkey, after the Obama Administration announced that it had cancelled plans to station missile defense radars and missiles in the Czech Republic and Poland. The exercise is expected to take place this coming October, and will involve units from Israel's air force and the US Navy.

News of the wargame was leaked to the pan-Arab daily al-Sharq al-Awsat by Israeli sources.

For my monitor friends who monitor Mossad numbers transmissions (E10), you may have an opportunity to hear some interesting traffic over the next few days. More on these number stations can be found on Simon Mason's website at http://www.simonmason.karoo.net/page69.html.

Here is the latest frequency info on E10 transmissions courtesy of the Enigma 2000 Sep 2009 Newsletter.

Frequencies in use (USB/kHz) + Callsigns