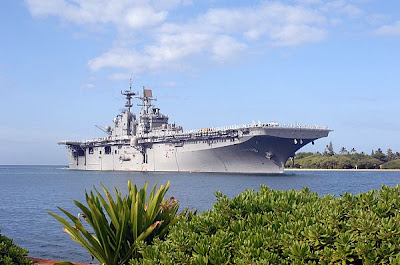 BONHOMME RICHARD, At sea (NNS) -- USS Bonhomme Richard (LHD 6), the flagship of the Bonhomme Richard Amphibious Ready Group (ARG), arrived in Savu Sea to conduct a multilateral exercise in cooperation with the government of Timor-Leste Oct. 14.

During Marine Exercise 2009 (MAREX 09), ARG Sailors and embarked Marines from the 11th Marine Expeditionary Unit (MEU) are scheduled to participate in Theater Security Cooperation programs and training ashore with the Timor-Leste and Australian militaries.

"We're excited to work with our Timor-Leste and Australian partners," said Commodore Capt. Rodney Clark, the ARG commander. "The ARG/MEU team hopes to build upon a strong relationship with this new country and make a difference in the community."

"The scope of the medical, dental and preventative medicine services the Navy harnesses afloat is an awesome capability not only for our own Marines and Sailors, but to those unfortunate few or many that may have suffered hardship," said Commander, Amphibious Task Force Surgeon Cmdr. Steven Gabele.

In addition to offering medical and dental assistance, ARG/MEU personnel will partner with local government and education officials to repair the roof of a secondary school as well as construct desks and chalk boards.

Bonhomme Richard Sailors and Marines have also volunteered to participate in local sporting events and visit children in orphanages in the country's capital city.

"It's a great thing. These projects not only meet needs [in Timor-Leste] but also meet the desires of Sailors and Marines to help people," said Cmdr. John Shimotsu, Bonhomme Richard's senior chaplain and community service coordinator. "One of the last things people remember is our ability to make a positive difference in the communities that we visit."

The ARG's other two ships, USS Cleveland (LPD 7) and USS Rushmore (LSD 47), are participating in the other portion of MAREX-09 in neighboring Indonesia.

The Bonhomme Richard ARG is transiting the U.S. 7th Fleet area of operations and reports to Commander, Amphibious Force 7th Fleet, Rear Adm. Richard Landolt, who is headquartered in Okinawa, Japan.
at 10/15/2009 10:30:00 AM