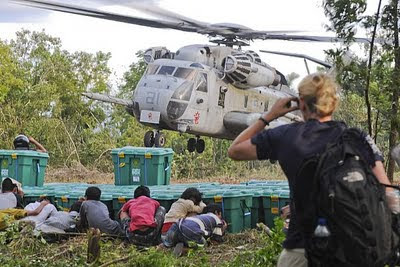 A relief agency worker photographs children from Hula Banda village as they use ShelterBoxes for cover from the prop blast of a CH-53E Sea Stallion helicopter assigned to Marine Medium Helicopter Squadron (HMM) 265. Each ShelterBox contains materials to sustain a family of 10 for several weeks. Amphibious Force U.S. 7th Fleet is coordinating U.S. military assistance to victims of the recent earthquakes in West Sumatra, at the request of the Indonesian government. (U.S. Navy photo by Mass Communications Specialist 2nd Class Greg Johnson/Released)

PADANG, Indonesia (NNS) -- Getting more than 60 tons of urgently needed supplies to some of the most remote mountain villages in Southeast Asia has been a tremendous challenge for relief agencies responding to the earthquakes that rocked Sumatra Sept. 30.

The solution: CH-53E Sea Stallion helicopters assigned to Marine Medium Helicopter Squadron (HMM) 265. During a mission Oct. 12, Marines, Sailors and Soldiers delivered 45 "ShelterBoxes," donated by the ShelterBox organization. The ShelterBoxes, which each contain a tent, blankets, kitchenware, tools, a water purification kit can sustain a family for several weeks.

Rear Adm. Richard Landolt, Amphibious Force 7th Fleet, flew on one of the missions to oversee the complex process of landing helicopters under difficult conditions.

"That was the first remote mission I've had the opportunity to be on since we've started, and I have to say, that was some very impressive flying," said Landolt. "They got in and out of a tight spot and made it look easy."

Pilots landed the helicopter on a peak nestled in the mountains of Western Sumatra, where villagers had drawn a white "H" on the ground. Service members and ShelterBox volunteers were greeted with smiling faces.

"I am so happy to see the helicopters coming here now," said Atin Nasution, a village resident. "Many people lost their homes during the earthquake, so I believe the supplies they brought here today will help many people."

The ShelterBox organization has relied predominantly on the U.S. and Australian militaries to transport the units.

"It's been invaluable having the U.S. military involved," said Becky Maynard, a ShelterBox program manager. "It would have taken four days for us to determine who needed help and who didn't, but with the U.S. military, we cut it down to just one day."

Amphibious Force 7th Fleet is coordinating U.S. military assistance to victims of the recent earthquakes in West Sumatra, at the request of the Indonesian government.
at 10/14/2009 09:19:00 AM