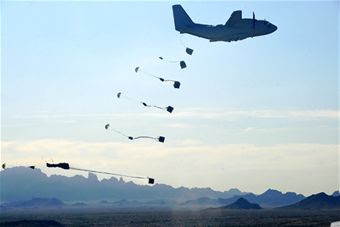 A C-27J Spartan practices airdropping bundles during flight testing of the plane at Yuma Proving Grounds, Ariz., in early 2009. In April, through Resource Management Decision 802, Defense Secretary Robert Gates moved the C-27J program and its related direct support mission from the Army to the Air Force. (U.S. Air Force photo)

In April, through Resource Management Decision 802, Defense Secretary Robert Gates moved the C-27J program and its related direct support mission from the Army to the Air Force. Since April, the Air Force and Air Mobility Command have taken a serious approach to building the program, officials said.

"The program is in transition from an Army-led joint program to a sole Air Force program," said Lt. Col. Gene Capone, AMC's C-27J test manager at the Joint Program Office. "Making a switch like this is no small affair, especially at this phase in the acquisition process. Because the Army lost all fiscal year 2010 C-27J funding due to RMD 802, the Air Force is funding the Army to continue leading the program through completion of Multi-Service Operational Test and Evaluation."

The Air Force will field 38 C-27Js, operated by the Air National Guard. Two are currently going through qualification and operational testing.

According to Air Force officials, the C-27J is an "extremely rugged" aircraft, designed for austere environments. And, although it has yet to complete its testing, they say it should thrive in the "dirt."

"Think of the C-27J as a 'mini-Herc' -- it looks like and acts like a C-130, but it is about half the size (3.5 pallet positions versus 6 to 8 pallets for the C-130)," Colonel Capone said. "This smaller size brings efficiency of scale to the Air Force's portfolio of airlifters."

The colonel also said the aircraft is very powerful and agile.

"It flies a lot like a C-130, but with a bit more power for its weight," he said. "Of course, as with most airplanes the pilots who fly the aircraft love it -- myself included."

"The Secretary of Defense gave the C-27J and its mission to the Air Force and we are 100 percent committed to making this work," said Maj. Gen. Brooks Bash, director of AMC's Air, Space and Information Operations Directorate.

A formal test is taking place from October through December in Iraq to gather information on this new Air Force mission.

"This test will help us work out the command and control structure of the direct support mission and help us to validate requirements," said Col. Bobby Fowler, also with the Air, Space and Information Operations Directorate.

Air Force officials say there is still a lot to do as more and more C-27s come into the inventory.

"A concept like this will take time and effort, but most importantly it will also require feedback from the forces," Colonel Fowler said.

AMC and Air Force officials plan to continuously review and update the C-27J using input from field commanders until it is incorporated into joint doctrine. 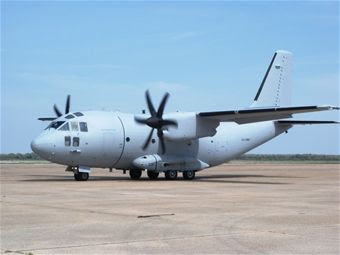