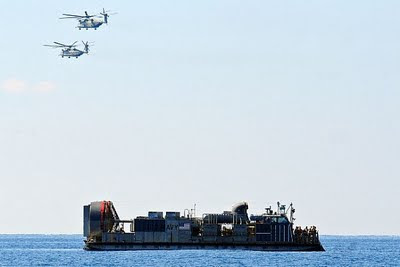 An updated video report on Bright Star 2009 is available at http://www.navy.mil/swf/mmu/mmplyr.asp?id=13332

The simulated assault combined the forces of the Egyptian army and navy, Pakistani marines, Kuwaiti marines, and U.S. Navy and Marine Corps forces from the MEU and ARG.

"The amphibious assault demonstration was not only a great demonstration of the cooperation of regional militaries, but it highlighted the amphibious expertise of the Marine Corps, Navy and coalition partners," said Col. Gareth F. Brandl, commanding officer of the 22nd MEU and native of Virginia Beach, Va.

According to MEU operations officer, Lt. Col. David Owen, the MEU has been planning for the exercise since June. Final details of the amphibious assault demonstration were coordinated between coalition participants upon arrival earlier in the week, he added.

"There was a significant amount of detailed planning that went into this event to ensure success," said Owen. "This is a great example of how we can work together with our partner nations in this region, regardless of any language barrier, and plan and execute very complex mission sets like the amphibious assault demonstration today."

Although the demonstration did not begin until mid-day, movement of aircraft, personnel and equipment began before dawn. The previous day included a full rehearsal to ensure the precise timing of the landing.

"This was a team effort," said Brandl. "Conducting operations like this with our partner nations now will help ensure we can conduct future missions in a proficient and professional manner."

The day's event began as a team of Egyptian special forces inserted on the beach, simulating beach reconnaissance prior to the assault. Shortly after, four AV-8B Harriers from Marine Medium Tiltrotor Squadron 263 (VMM) (Reinforced), attached to 22nd MEU, streaked over the viewing stand to simulate the targeting of enemy positions on the beach.

The next waves of forces consisted of AAVs and Egyptian amphibious assault craft which displayed the maneuverability and firepower amphibious vehicles can deliver on enemy positions ashore. The last waves brought the MEU's light-armored vehicles and the Humvees of the unit's Combined Anti-Armor Team to the beach aboard landing craft utility vessels from Assault Craft Unit 2 and Landing Craft Air Cushioned transports from Assault Craft Unit 4.

"This type of training is important because it shows us what we can accomplish working with other forces from around the world," said Cpl. Gabriel T. Church, native of Marion, N.C., and a vehicle commander with Combined Anti-Armor Team, Weapons Company, 3rd Battalion, 2nd Marine Regiment, 22nd MEU. "As the theater reserve force, there are endless possibilities of what we may be asked to do - non-combatant evacuations, humanitarian relief or combat operations. This training helps keep our edge sharpened if the situation calls for it."

Bright Star, the longest running exercise in the U.S. Central Command's Area of Operations, was established in 1981 as a result of the Camp David Peace Accords. The CENTCOM and Egyptian co-sponsored exercise is designed to strengthen military-to-military relationships and improve readiness and interoperability between U.S., Egyptian, and coalition forces. 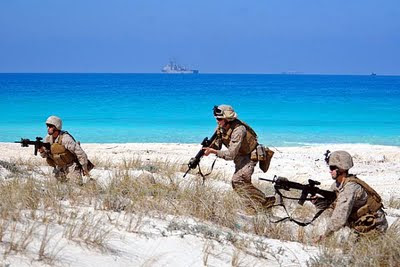