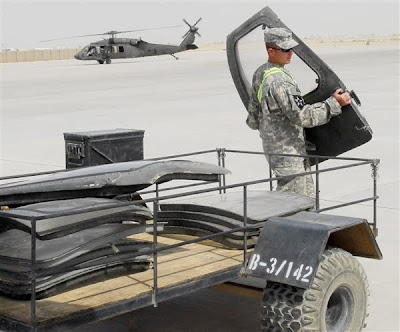 Army Staff Sgt. Michael Maass carries a Black Hawk helicopter door before an early morning flight as part of his duty as a member of the push crew. U.S. Army photo by Sgt. Neil Gussman

CONTINGENCY OPERATING BASE ADDER, Iraq - For door gunners and crew chiefs in Company A, 1st Battalion, 106th Aviation Regiment, the longest days are the ones when they don't fly.

This Illinois Army National Guard unit uses a "push crew" to make sure every mission takes off on time and each aircraft gets back to mission-ready status as soon as possible.

If a mission is set to fly at 6 a.m., for example, the flight crew arrives for a pre-flight briefing at 3 a.m. The push crew begins its work at 2 a.m.

"The first thing to do at 0200 is start the coffee," said Army Cpl. Ricki Jenkins of Glasford, Ill. "Before going to the airfield, the push crew writes down the crew roster, the tail numbers of the birds, time out and time back."

The push crew normally consists of a crew chief or gunner for each pair of Black Hawk helicopters, but sometimes the crew is just one soldier. The crew drives a half-mile from the orderly room to the maintenance hangars, where they switch to a specially equipped Gator vehicle. Before going to the flightline, the push crew gathers aviation life-support equipment, weapons, water, ice and the egress kits for ground-mounting the M-240 door guns. The push crew also gathers the flight crew's flight bags, helmets, vests and communications gear. Soon, the push crew is on the flightline loading equipment and getting the Black Hawks ready for the mission.

If the aircraft has a problem before takeoff, the push crew is ready to move the crew and equipment to another aircraft.

"Our priority is to make sure the mission goes on time," said Army Capt. Jason Henderson, Company A commander and a Normal, Ill., resident. "If there is a mechanical problem, the push crew can bump [the flight crew] to a spare aircraft."

Henderson said the push crew's role in post-flight operations is just as important as getting the mission ready to go.

"They make sure aircraft are ready for the next mission," he said. "When the mission is over, the push crew identifies and fixes faults right away."

A half hour before the mission is scheduled to land, the push crew is back at the airfield, loading the doors and windows in the Gator's trailer. As soon as the first Black Hawk lands, the push crew and the flight crew work together to get aircraft ready to fly for the next mission. The M-240 door guns are dismounted and set in the Gator. The crew members take off their helmets, vests and other flight gear and load their bags. The push crew re-hangs the doors, installs the windows and ties down the rotor blades.

While the equipment is loaded, post-flight maintenance begins. The Gator has a rack above its dashboard with every kind of lubricant a Black Hawk helicopter needs, as well as tools for on-the-spot repairs.

"By the time we get the gear stowed and the weapons turned in to the arms room, it's a long day," said Army Staff Sgt. Michael Maass of Hillsboro, Ill. Maass, a door gunner who was with Company A on its previous deployment to Iraq in 2004 and 2005, is a full-time Army National Guard technician and a wheeled-vehicle mechanic who volunteered to be a door gunner for this deployment.

"Door gunner is a job that only exists in a war zone," he said. "We [door gunners] all volunteered to deploy."

For a mission that takes off at 6 a.m. and returns at 1 p.m., the push crew starts work at 2 a.m. and may still be finishing routine maintenance hours after the flight lands; their days average 12 to 14 hours. The standard rotation for a Company A door gunner or crew chief is four days of flight, two days of push duty and one day off.