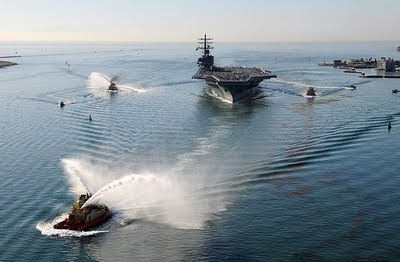 SAN DIEGO (NNS) -- Four ships and more than 5,000 Sailors of Carrier Strike Group (CSG) 7 returned to their homeport of San Diego Oct. 21 after a five-month deployment to the U.S. 5th Fleet and 7th Fleet areas of responsibility (AOR).

"This is the finest team of Sailors I've been fortunate to call shipmates," said Rear Adm. Scott Hebner, commander, CSG 7. "I could not be more proud of each and every Sailor and their families. The Ronald Reagan Carrier Strike Group has been pretty busy the last few years, executing missions across the capabilities of our National Maritime Strategy--and answering the call with impressive results every time."

Ronald Reagan and embarked Carrier Air Wing (CVW) 14 operated in the 5th Fleet AOR for more than two months, providing 30 percent of all air support to U.S. and coalition ground forces in Afghanistan. In total, they flew more than 1,600 sorties in support of Operation Enduring Freedom.

Ships of the Ronald Reagan Carrier Strike Group were also vital in counterpiracy operations off of Somalia and the Horn of Africa, and MSO to include protecting vital Iraqi infrastructure in the North Arabian Gulf.

"Every single Sailor knew how vital the mission was to accomplish," said Capt. Kenneth Norton, Ronald Reagan's commanding officer. "Because they understood, regardless of their operational tempo, they performed the mission, not just to get it done, but to get it done well. They're selfless. Everybody did their job well to provide service to our Marines, Sailors, Soldiers and Airmen in Afghanistan."

"Being able to afford our Sailors the opportunity to lend a helping hand to those who are truly in need, speaks volumes to the character of our Sailors," said Chief Religious Progams Specialist (SW/AW/FMF) Marcus Taylor, who coordinated Ronald Reagan's COMREL projects. "I believe the Sailors that volunteer really should be commended for their selfless efforts. It is a clear display of maturity and devotion to being goodwill ambassadors for the Navy and the United States."

Now at home, many Sailors of the Ronald Reagan Carrier Strike Group will take leave to spend time with family and friends.

"This is my second deployment in two years," said Interior Communications 2nd Class Adam Treptow, who will be going on leave to his hometown of Parker, Colo. "Homecoming is always an indescribable feeling. I'm too excited. This is a chance for me to get off the ship, relax, unwind and finally buy myself a new truck."

The squadrons of CVW-14 include the "Redcocks" of Strike Fighter Squadron (VFA) 22, the "Fist of the Fleet" of VFA-25, the "Stingers" of VFA-113, the "Eagles" of VFA-115, the "Black Eagles" of Airborne Early Warning Squadron (VAW) 113, the "Cougars" of Tactical Electronic Warfare Squadron (VAQ) 139, the "Providers" of Carrier Logistics Support (VRC) 30, and the "Black Knights" of Helicopter Anti-Submarine Squadron (HS) 4.

This ends the fourth deployment in four years for Ronald Reagan. The ship is named after the 40th U.S. president, and carries the motto of "Peace through Strength," a recurrent theme during the Reagan presidency.
at 10/24/2009 07:49:00 AM