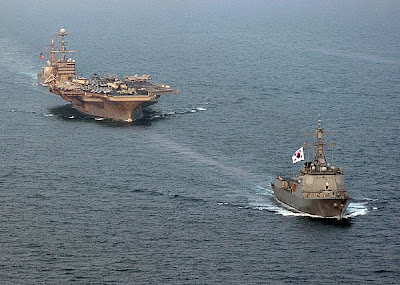 There is a video report on this story at http://www.navy.mil/swf/mmu/mmplyr.asp?id=13333

Beginning Oct. 10, embarked ROK Navy liaison officers and Sailors worked alongside Sailors on board USS George Washington (CVN 73), the Navy's only permanently forward-deployed aircraft carrier. According to GW Operations Officer Cmdr. Anthony Calandra, the focus of the exercise was to exchange ideas and operating procedures, so that both navies are better prepared to work together in the event of a crisis.

"ROK officers and Sailors did a lot of the command and control for the exercise," Calandra said. "They've been working in the Combat Direction Center and with Destroyer Squadron 15, standing watches alongside our Sailors. The professional exchange included briefings, watchstanding and the same kind of jobs our Sailors on board are doing right now."

"We've tried to learn from DESRON 15 and how they conduct carrier strike group operations," said ROK Navy Lt. j.g. Jun-Chul Shin, a Task Force 51 liaison officer. "We stood watch with them in the Zulu module and learned how DESRON 15 conducts daily operations."

"They learned those procedures and nuances—some of the things that are specific to what we do—in order to help support us. In the same way, we learned how they operate so we can better support them."

"It was a great experience to work together with the professionals aboard USS George Washington and see the relationship between the AIC, air operations and [Carrier Air Wing 5]," said Kim. "The crew has been very kind and helpful to us, and it's like we've worked together before—I feel like I'm part of the crew."

"Obviously, it was very exciting for us," added Kim. 'It's the first time for many of us to be on an aircraft carrier, and carrier flight operations is something we've not experienced this closely before. We're learning how the carrier, air wing and strike group conduct flight operations and learning how to work within that system. We now have a better understanding, and that will help us when conducting combined operations."

Calandra said bilateral exercises like this are an integral part of GW's role as part of the Forward-Deployed Naval Forces, and a benefit to both partner navies.

"If we operated as individual units and individual countries, we wouldn't be nearly as strong or nearly as coordinated as we are," he said. "We build that team just like you build a sports team—by practicing together. If we practiced individually, we wouldn't know what to expect from our allies and from our partners and it just makes the operation harder."

The exercise directly supports the nation's Maritime Strategy by promoting interoperability and cooperation, which serves to enhance stability and security throughout the U.S. 7th Fleet Area of Responsibility. 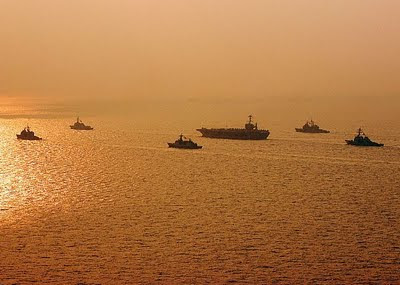